Cornelis CORT: The Lament of the Art of Painting 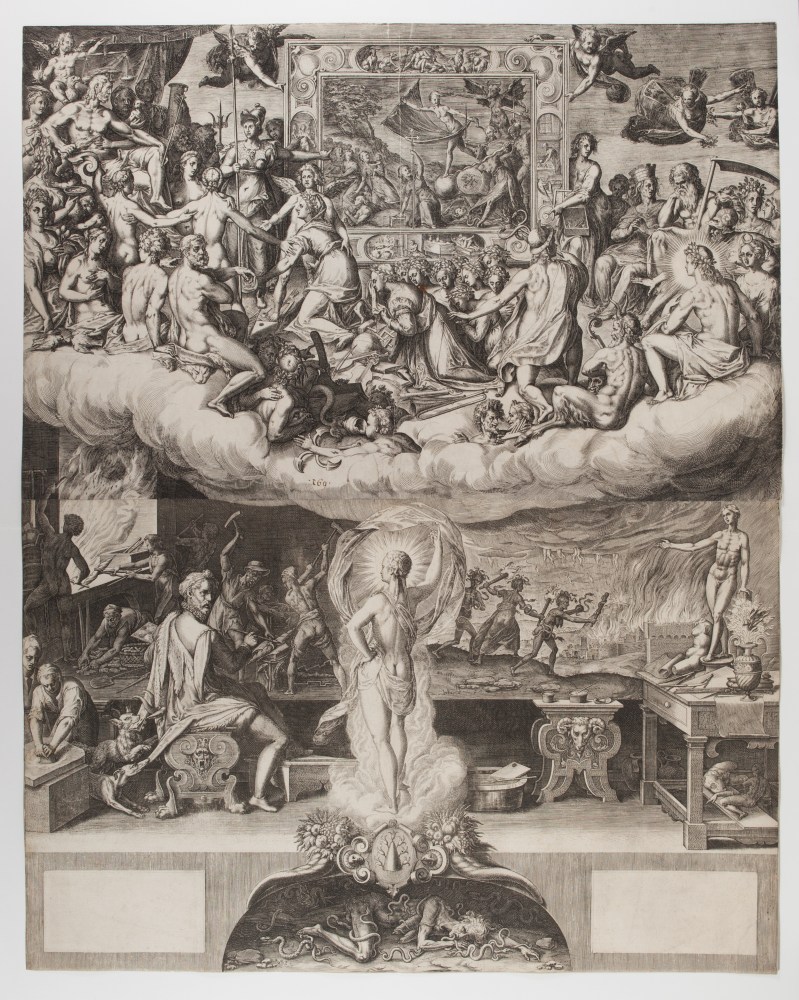 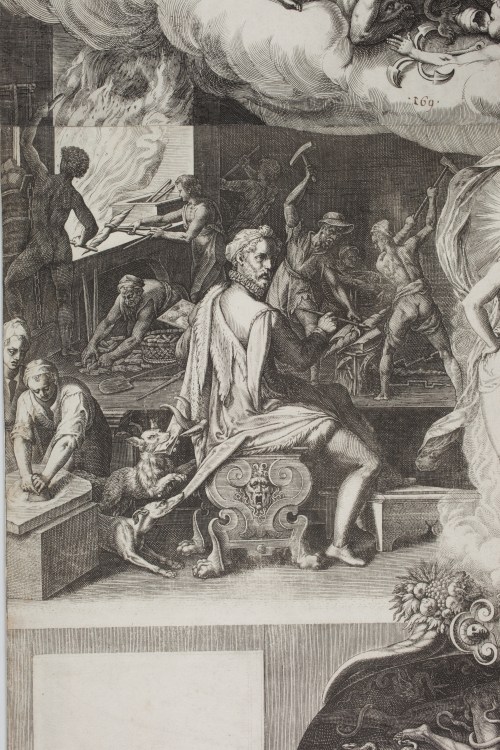 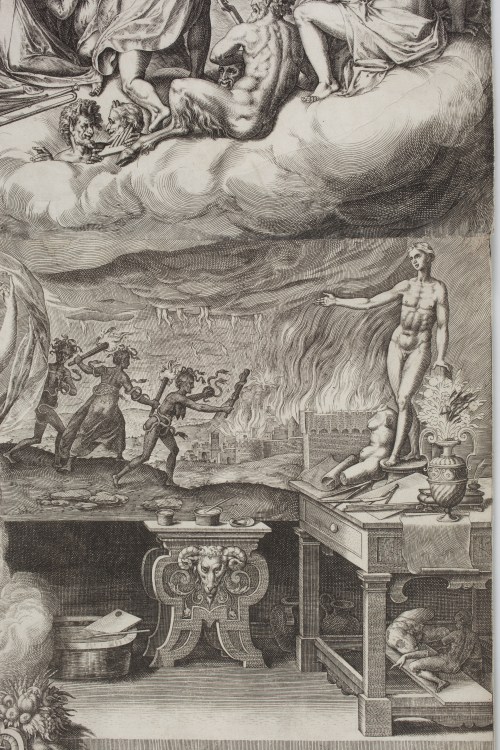 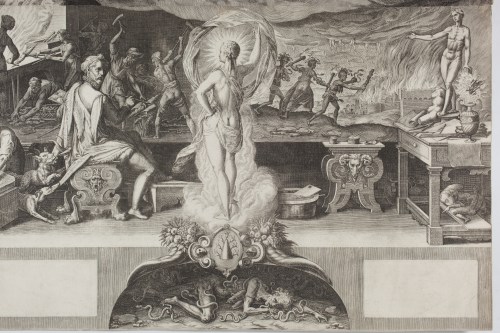 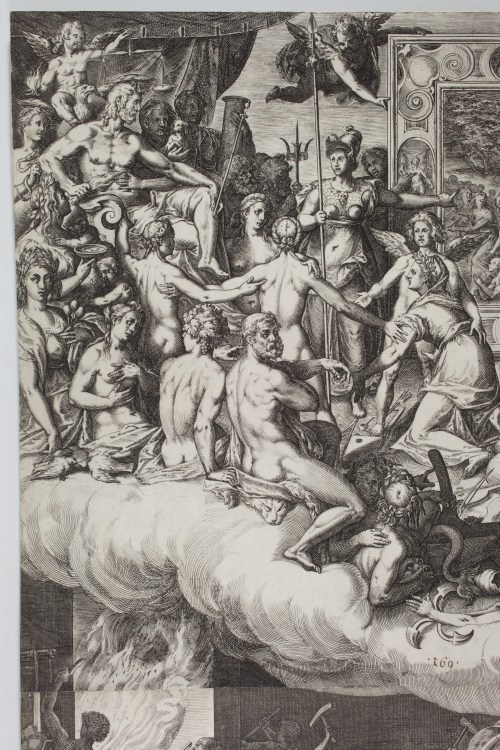 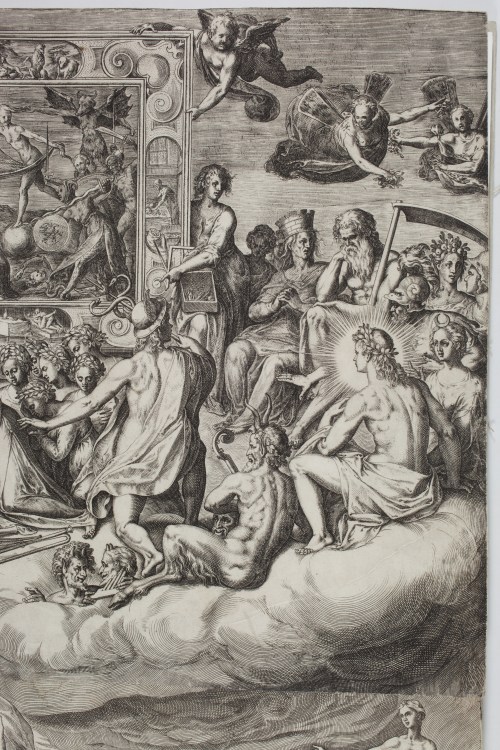 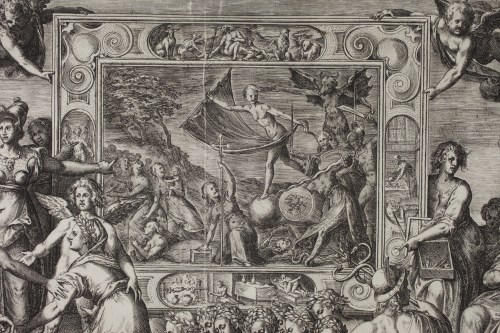 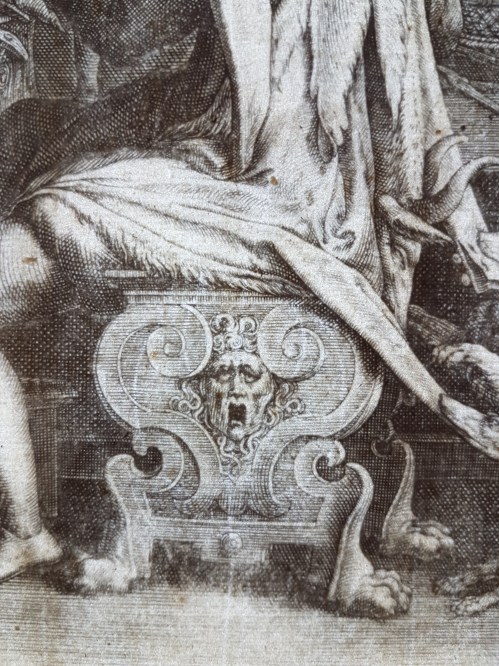 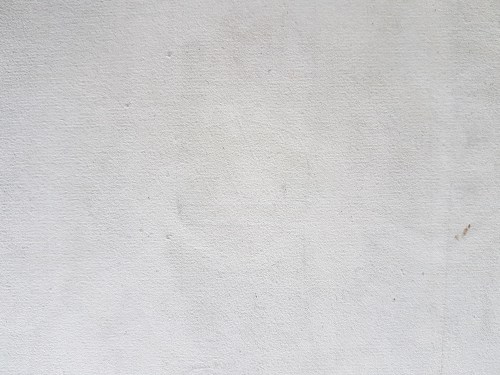 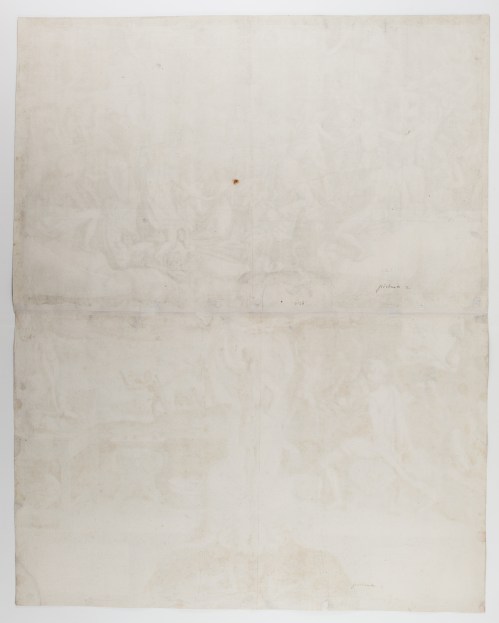 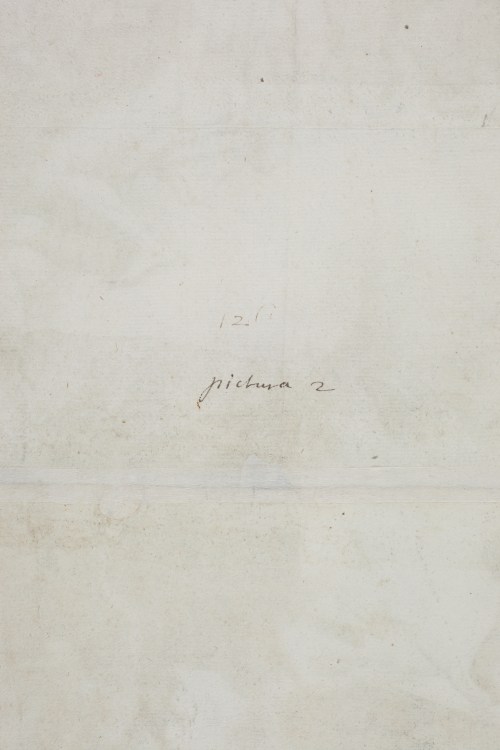 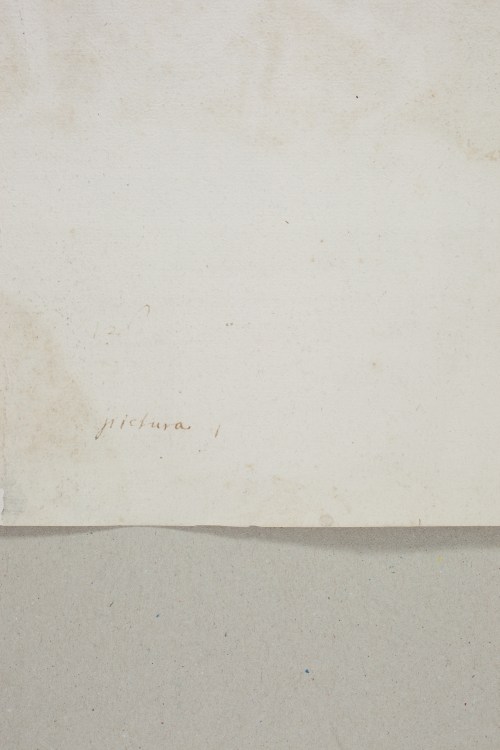 Manfred Sellink (New Hollstein, Cornelis Cort) does not distinguish between different editions, but describes the plate as “before any inscriptions” and then lists five variants. Variants a to d have text added in the cartouches and underneath composition. Variant e has no inscription, but two scenes, etched on separate plates, are printed in the cartouches.

Our impression, with no inscription or scene in the cartouches, is consistent with the work "before any inscription". The quality of its printing confirms this anteriority.

Very fine impression printed on two sheets of watermarked laid paper joined end to end. A horizontal strip, which is blank in this edition, is missing underneath the composition. Two watermarks are visible: on the upper sheet, a shield close to Briquet 1884 (Shield with a half-unicorn, Lucca ca. 1569-1586, Rome 1576-91, Syracuse, 1591) and on the lower sheet, a crescent moon measuring ca. 39 x 38 mm. Impression trimmed on the borderline or just outside with thread margins, trimmed 2 mm inside the borderline on the left edge only at the level of the goddess holding pomegranates (probably Persephone). On the upper sheet, a vertical median drying crease a little rubbed in its upper part, an old number .169. written in pen and ink. On the lower sheet, three small losses of paper repaired on the upper edge with addition of horizontal lines in watercolour; the lower right corner has been reattached. Early inscription in pen and ink on each of the two leaves verso: pictura 1 and pictura 2, certainly referring to the title of the engraving, and 12 Ր, probably the price. Condition report on request.

Impressions of the top part only are sometimes found, since the plate for that part has been kept to this day. Complete impressions like this one are very rare.

The Lament of the Art of Painting, a complex allegorical piece, gave rise to diverging interpretations.

It is today grouped together with two other engravings by Cornelis Cort: The Calumny of Apelles, also engraved after Federico Zuccaro, and The Academy of Fine Arts, after Johannes Stradanus.

Manfred Sellink has an entry on these three prints in his catalogue Cornelis Cort, accomplished plate-cutter from Hoorn in Holland: “Three allegories of the visual arts” : “The 15th and 16th centuries witnessed many attempts on the part of artists, art theorists and connoisseurs - especially in Italy - to elevate the visual arts to the status of an intellectual art form that could rank alongside poetry, music and rhetoric. […] At the same time, the Italian Renaissance witnessed an upsurge of interest in ways of improving the quality of the practical and theoretical training of young artists […] and thus raising the status of the visual arts and those who practised them. These three engravings by Cornelis Cort […] exhibit both aspects of this development in an interesting way.”

The Lament of the Art of Painting is the largest of the three engravings.

The author of the composition, Federico Zuccaro, an erudite painter and art theorist, had wanted to reform Fine Arts education by putting much more emphasis on theory.

He was a founding member of two academies, in Florence and in Rome. The painter sat on the left, painting a large canvas, in the lower part of The Lament of the Art of Painting is probably a self-portrait.

The young woman who interrupts him could be seen as an allegory of Painting, who is complaining to the painter about the low esteem in which she is held. She has vanquished Jealousy, locked away in a cave under her feet, but her struggles are not over: she points to a scene placed in the upper part of the engraving, representing Olympus and an assembly of gods. Minerva, goddess of Wisdom and sponsor of the Arts, is trying to convince Jupiter of the importance of Painting by showing him a large canvas: “an allegorical painting in which Fortune, rushing along at the head of her evil train, is held at bay by Faith. Depictions of vices are set into the broad frame of the painting: at the top Ignorance, with asses' ears, on the right a bearded man loads money into sacks (Avarice), at the bottom meat is being roasted, drink stands on a table, and a couple are making love (Voluptas), and on the left there is a nude figure holding playing cards and a fan (Vanity)” (Inemie Gerards-Nelissen, p. 46). The moralising usefulness of Painting should convince Jupiter to allow it to join the nine traditional Muses.

According to Ineme Gerards-Nelissen, the topic of The Lament of the Art of Painting originates in documents from the 16th century recounting the apparition of an allegory of Painting, in the shape of a woman, complaining to an artist that she is not held in high regard. She cites two narratives in particular, one of which is told by Michelangelo Biondo in his treatise Della nobilissima pittura (1549).

The Lament of the Art of Painting is extremely rich in details and we will not describe them all; some of them are difficult to interpret.

Let us only mention here the two dogs who are avatars of Envy: they are tugging at the painter’s clothes in order to distract him from his painting. They also appear in The Calumny of Apelles engraved by Cort after another composition by Federico Zuccaro: Envy has let loose her two dogs on Greek painter Apelles. This scene alludes to an episode from Classical Antiquity that was quite popular during the Renaissance: a competitor of Apelles has slandered him to King Midas; Apelles was found to be innocent and memorialised the event in an allegorical painting. Federico Zuccaro is thought to have adapted the story for his own purpose: Manfred Sellink indeed notes that “Federigo Zuccaro regularly quarelled with clients and fellow-artists, as a result of which, in 1581, he was actually banished from Rome”.