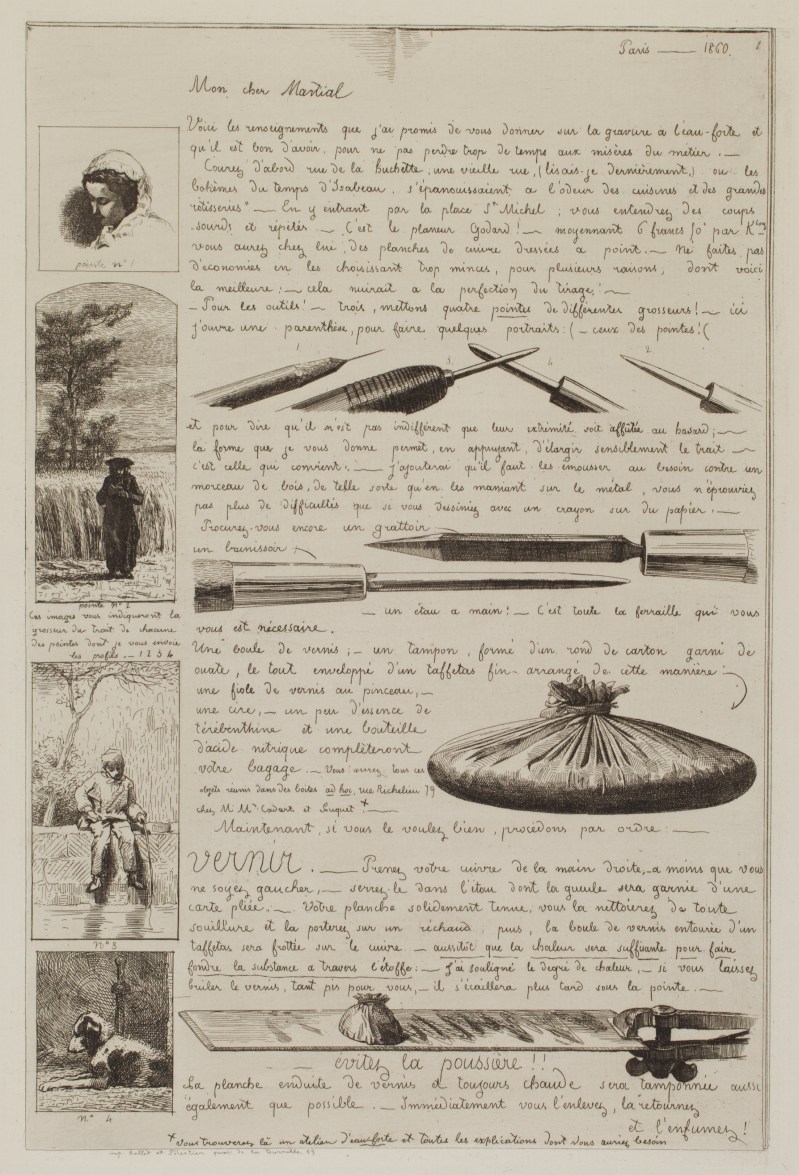 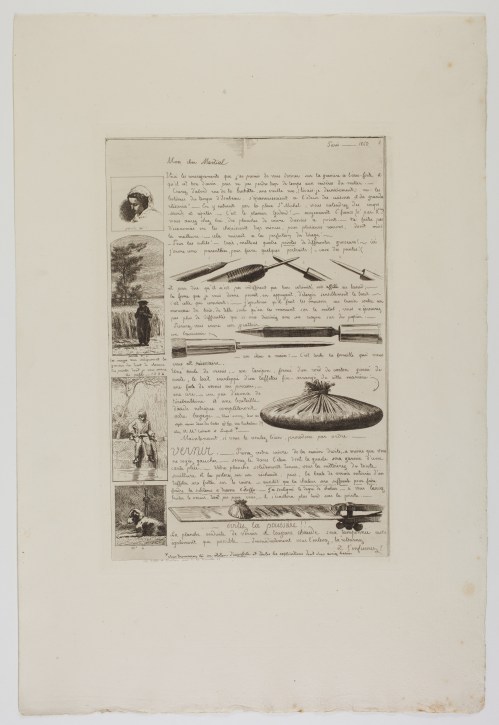 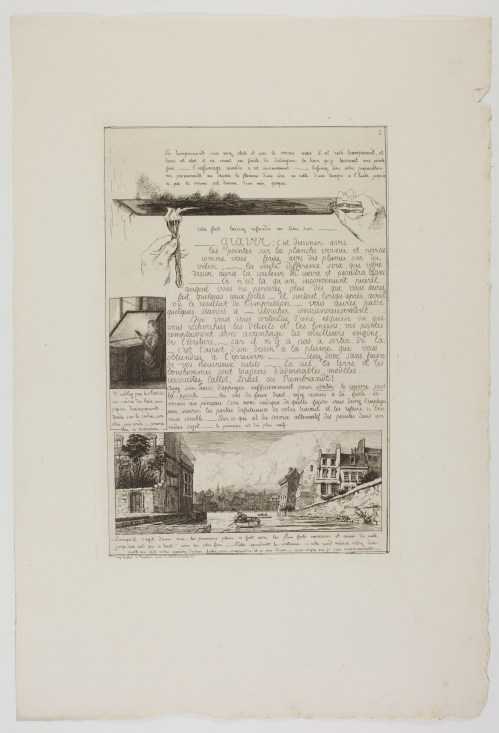 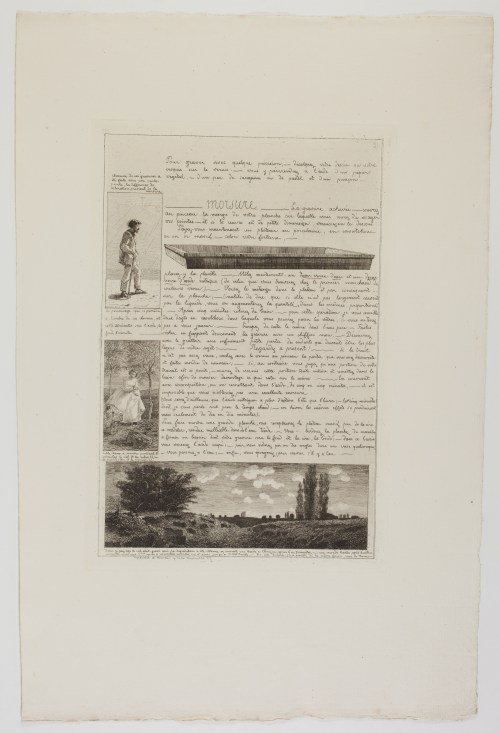 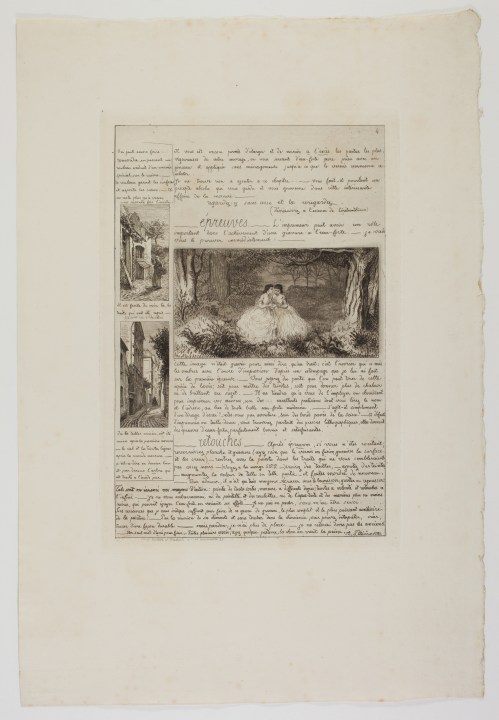 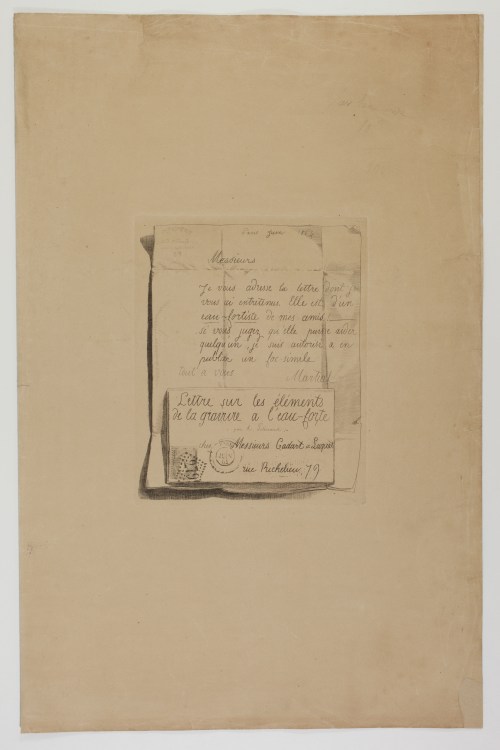 [Letter on the Elements of Etching]

Complete series of four plates contained in a folder with an etched frontispiece, published by Cadart et Luquet and printed by Beillet et Forestier. The four inner plates, numbered 1 to 4 in the subject, are printed on watermarked laid paper (watermark: [ARC]HES.) The folder containing them is in fine tan wove paper. Plates generally in excellent condition, two tiny tears in the right margin of one plate and some very rare pale foxmarks. Full uncut margins (sheet: 455 x 310 mm). Folder: a few small repaired tears on the edges and the inner fold and a repaired loss of paper in the lower right corner. Dimensions of the folded cover: 502 x 325 mm.

The folder is decorated with a frontispiece reproducing in trompe-l'oeil a small unfolded letter accompanied by its envelope. It is a short note written by a man named Martial to Messieurs Cadart et Luquet. He addresses to them a second letter written to him by un eau-fortiste de [ses] amis [an etcher, a friend of his], a man named A. Potémont. The title of this letter is written on the envelope: Lettre sur les éléments de la gravure à l'eau-forte. Martial asks their opinion on the interest of publishing a facsimile, as the author allowed him. These are the four plates imitating the pages of a letter contained in the folder. Adolphe Martial Potémont not only exploits two classic rhetorical devices: the letter within the letter and the double to which he gives his name, but he also uses a trompe-l'œil to give credence to his story: how can one doubt the existence of a letter whose image he shows?

Little is known about the genesis of this "letter". The envelope and the letter signed Martial which serve as the title page of the series bear the date June 1864. The four-page letter signed A. Potémont is dated 1860. It is most certainly the "Traité d'eau-forte par Martial. Résumé en quatre feuilles in-folio" [Treatise about the etching, by Martial. Summarised in four folio sheets] described among the novelties "on sale at MM. Cadart and Luquet" at the end of the 1865 Almanach de la Société des Aqua-fortistes: "This little treatise, presented in the familiar form of a letter to a friend, gives anyone who knows how to draw the professional techniques of etching, with an example etched opposite the explanation. With this treatise, two hours are enough to know everything that is theoretical about etching. Practice and experience do the rest.” (translated by us)

Martial Potémont humorously explains some basic advice that should allow beginners to "not waste too much time on the miseries of this craft" and to soon "resurrect Callot, Israel or Rembrandt!”. Images of tools and etchings illustrate his point. He describes the necessary equipment and the different stages of etching: preparation of the plate with varnish, etching, biting, printing of proofs and retouching if needed. The copperplates can be bought from a reputable planer, the Godard company, rue de la Huchette, in Paris. As for the tools and products needed, they can be found at Cadart et Luquet, 79 rue de Richelieu, headquarters of the Société des Aqua-fortistes: etching needles of various sizes, scraper, burnisher, hand vice, varnish ball, cotton swab, turpentine and bottle of nitric acid. At the same address, amateurs will find an etching workshop where they can receive advice.

The first stage consists of varnishing the plate held in a vice: it must be cleaned, heated and then coated with varnish using a ball that is melted on the hot plate; the plate must then be smoked: the lines that will be drawn in the varnish that has become black will thus expose the red copperplate and appear in contrast. The second step is the etching, i.e. drawing on the plate with tools of different sizes. It is possible to draw directly or to transfer a drawing onto the plate using vegetable paper and sanguine or pastel. Repentances are allowed by applying varnish with a brush on a failed line.

Potémont recommends using the thickest needle in the foreground to the thinnest in the background in order to create gradations, but he adds jokingly: "Whatever you do, make yourself understood and it will be fine - you see I'm accommodating!" Next comes the bite. After protecting the edges of the plate and possibly the reverse side, it is placed in a basin containing a liquid composed of half water and half nitric acid. Potémont advises biting the plate for five minutes at a time (ten minutes in winter) in order to control the progress of the bite and to gradually cover the parts that have been sufficiently bitten.

The next step is printing, which can be done at a printer's or at home if we have a press. Potémont emphasises the importance of printing, and therefore of the printer, using as an example the central illustration on the fourth plate, about which he says: "It was the printer who created the shadows with the printing ink in accordance with the shadows I drew on the first proof". It should be noted that the impressions of this illustration are very different from one copy of the Letter to another: the areas where a veil of ink has been preserved and those where the plate has been carefully wiped off are not exactly the same on our print and on the two copies in the Rijksmuseum.

If the impressions do not entirely satisfy the artist, writes Potémont, he can retouch his plate either by deepening some strokes or by adding new ones, or by softening certain parts with the burnisher or the scraper, or by pushing back the copper on the back of the plate. Finally, he insists on the patience required by the aquafortist in all the stages of the etching process. When it comes to the bite, the only precept, for those who absolutely want one, would be: "look at it over and over again and look at it again". This is also the final word: "Just one friendly word to finish - make several attempts; have some patience; the thing is worth it."