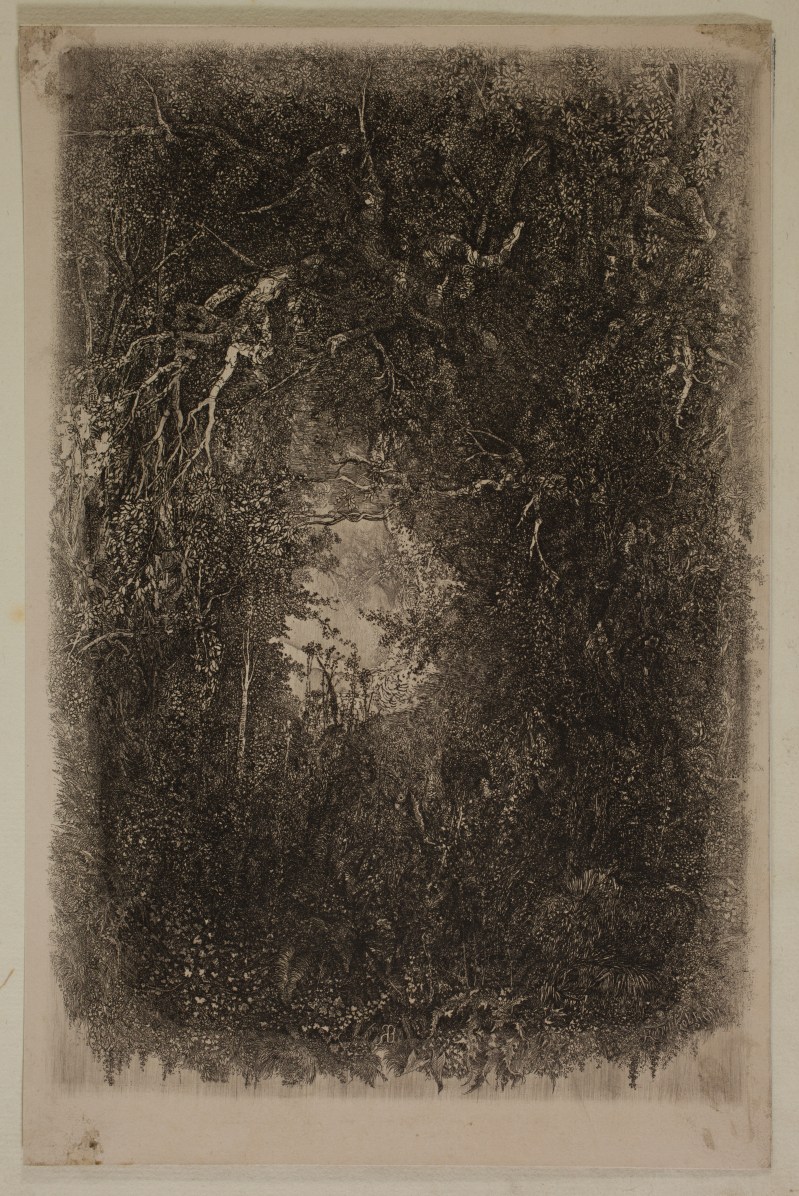 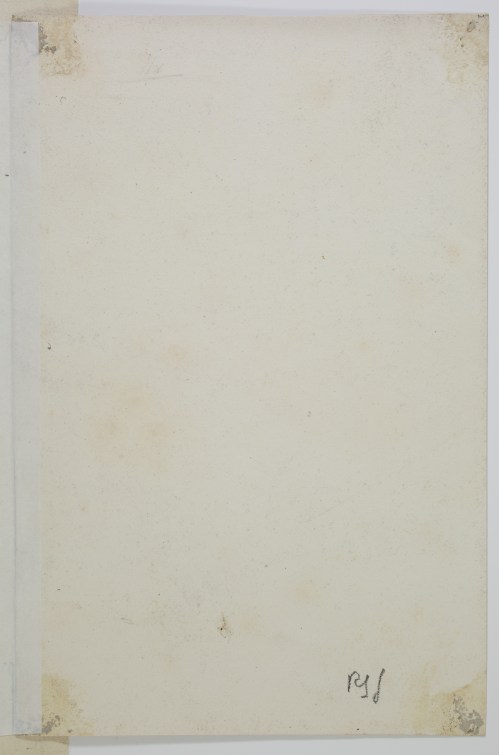 Very fine impression printed on chamois chine appliqué on white heavy wove paper. Slight stains in the corners, otherwise in very good condition. Impression trimmed inside the platemark, with good blank margins around the subject. The impression is mounted with a hinge of paper on an old sheet of laid paper.

An extremely rare impression. Dirk van Gelder only mentions “two authentic impressions known” printed by Bresdin himself “on chine appliqué”: one is in the Kunstmuseum Den Haag, formerly Gemeentemuseum (this impression is reproduced in Van Gelder’s catalogue), and the other, bearing Bresdin’s personal red stamp, used to be in the Richard Bühler collection in Winterthur (this impression is reproduced in Die Schwarze Sonne des Traums, p. 96, cat. no. 56). Van Gelder adds that “there were very probably only a few posthumous impressions, all on laid Holland paper, for example the impression with blind stamp in the Bibliothèque nationale in Paris, which Rodolphine Bresdin described as : ‘one of the prints that Delâtre printed for me on Holland chine… a marvellous etching from a copperplate that was left with Delâtre.’” (our translation). Maxime Préaud describes this impression, now in the Réserve des Estampes in the BnF, as “an impression on cream chine appliqué on cream laid paper, with the blind stamp (Lugt, 2194) encroaching slightly over the subject and which by mistake has been placed in the upper left corner.” (our translation). Van Gelder mentions another impression from a posthumous edition, in the Chicago Art Institute; it is printed on cream laid paper. He also mentions an impression in the Paul Prouté collection in Paris.

This impression is most likely from the first print run. The paper, a chamois chine appliqué on heavy white wove (not laid) paper, was indeed one that Bresdin himself commonly used for his prints. Van Gelder notes that in his early days, Bresdin most often printed his etchings on laid paper or fine handmade wove paper, but that “later, and especially when he began to make lithographs, Bresdin resorted more and more to chine paper, which was very fashionable in the 19th century. It was generally fine or extra fine wove paper, of excellent quality and of various colours: from off-white or light gray to cream, yellowish and light brown;” this was then applied to “a second, larger sheet of wove paper, which would serve as a mount for the impression” (Van Gelder, vol. 1, Appendix VI, p. 186, our translation). We also know that Bresdin frequently trimmed his own impressions.

Bresdin etched L’Éclaircie dans la forêt [The Clearing in the Forest] on the copperplate of another etching, La Forêt [The Forest] (VG 142), which he had made shortly before; the new etching covers the previous one almost entirely, as Dirk van Gelder realised, noticing that Bresdin had done the same in several of his later etchings: “In his last period he only depicts an uninhabited world. In 1880 he produced four etchings, the fruits of a deep intimacy: Paysage rocheux [Rocky Landscape] (cat. 143), Cours d’eau [The Stream] (cat. 144), Ruisseau sous-bois [Stream in the Woods] (cat. 145) and L'Éclaircie dans la forêt [The Clearing in the Forest] (cat. 147). All four are based on earlier works [Le Ruisseau des gorges [The Torrent in the Gorge] (cat. 130) for Paysage rocheux, Cité lointaine [The Distant City] (cat. 131) for Cours d’eau, Baigneuses dans la montagne [Women Bathing in the Mountain] (cat. 115) for Ruisseau sous-bois, Forêt [The Forest] (cat. 142) for L'Éclaircie dans la forêt]. Financial difficulties spurred Bresdin to miracles of ingenuity. He scraped his old copper plates and covered them with black varnish, no longer, as in Bordeaux, to modify his designs, to create new states, but to project his new dream on the remains, salvaged from the scraper, of a world now disowned.” (Van Gelder, vol. 1, p. 152, our translation).

The subject of L'Éclaircie dans la forêt remains mysterious. Van Gelder quotes the description given by Robert de Montesquiou of the impression he had in his collection at the time (which according to Van Gelder is the one now in the Art Institute of Chicago): “perhaps a reminiscence of the journey to America, as if a frontispiece depicting a virgin forest : an inextricable jumble of branches tangled with foliage and vines in circles, around a vague gap in the branches, with light at its center, such as among the thorny impediments of difficulties and obstacles, a luminous perspective on the unknown, on hope...” (Robert de Montesquiou, pp. 29-30, our translation).

If the perspective of L'Éclaircie dans la forêt seems at first sight similar to that of Branchages [Branches] (VG 146), very soon it is obvious that it is definitely not as clear. In Branchages, the perspective is a low-angle view, with the viewer's gaze at the bottom of the trunk, at the level of the roots of the tree. Similarly, Paysage rocheux, Cours d’eau and Ruisseau sous-bois are situated in a classical landscape space, one in which the viewer can easily situate himself. This is no longer the case with L'Éclaircie dans la forêt: despite the perspective opened up by the gap in the branches, the viewer finds no point of reference. Contemplating this tangle of branches and foliage, we wonder not only about what we see but also about where we are seeing it from. Are we inside or outside, below or above? As François Fossier observes, “one really does not know where to place oneself in this inextricable tangle of roots, ferns, vines, and thin leaves.” (Fossier, p. 17, our translation). The gap in the canopy itself is not, strictly speaking, an opening onto a background, as in Le Bon Samaritain [The Good Samaritan] (VG 100) or La Fuite en Égypte [The Flight into Egypt] (VG 85), where a city is visible in the distance. The only point of reference Bresdin gives are the almost invisible signatures engraved at the bottom: the monogram RB in the middle and the letters RoDophe BReDin (sic), with the date 1880 in front, on the right. However, the print could be viewed just as well the wrong way round. This explains why, on the impression at the BnF, Rodolphine Bresdin’s stamp and then that of the library have been mistakenly affixed at the top of the print and not at the bottom, where the signatures are (this print was subsequently reproduced upside down in Bresdin, Dessins et gravures by Dirk van Gelder in 1976, and then right way up in the catalogue raisonné).