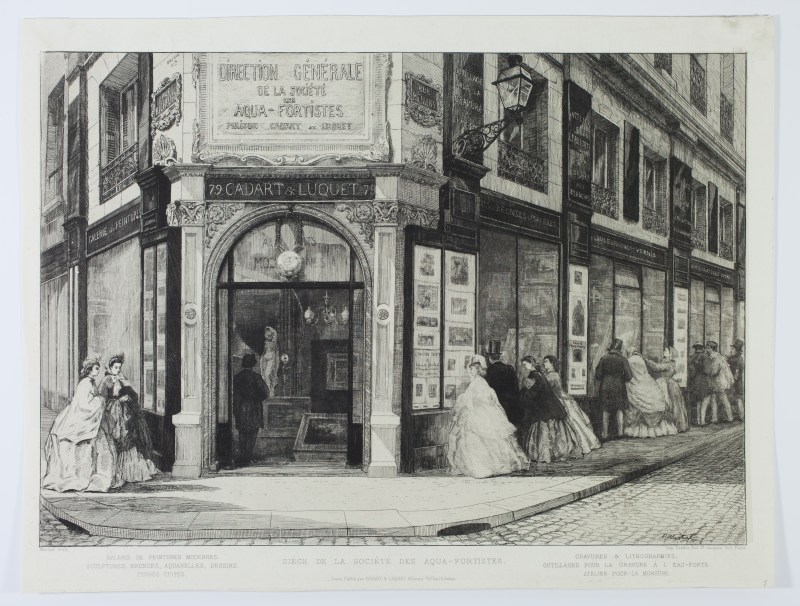 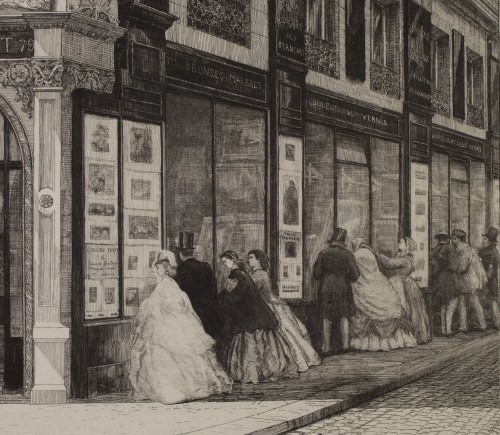 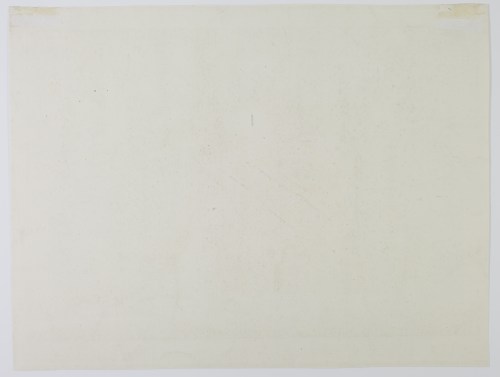 The Headquarters of the Société des Aquafortistes was published by the Société des Aquafortistes in the first issue of its third year (1st September 1864). The ordinary edition was on laid paper. There was also a luxury edition of 25 impressions before letter on Holland paper. This impression, printed on cream chine appliqué on wove paper, was also probably a luxury impression. Prints bought through subscription could also be sold separately, at a higher price point.

In front of the wide, richly furnished shop windows, at the corner of the rue de Richelieu and the rue Ménars, connoisseurs and curious people, men and women from all walks of life, are crowding together, examining and commenting on the works on display: etchings, paintings, drawings, sculptures... The year is 1864. Alfred Cadart opened his store the previous year, after having separated from Félix Chevalier; together, they had founded the Société des Aquafortistes in 1862. With Jules Luquet, Alfred Cadart founded the company Cadart et Luquet, which moved to 79, rue de Richelieu, trading at the sign Aux Arts modernes. The numerous inscriptions on the façade, which Potémont also engraved under the picture, list the products offered in the store. Works of art are available for sale: paintings, engravings, lithographs, sculptures, bronzes, marbles and terracottas, watercolours and drawings; but also artists’ supplies: tools for etching, pigments and grounds. The building also housed a workshop where Cadart and Luquet invited artists to come and try their hand at etching, declaring that “they would be happy to show all those who would come to them the use of tools, how to apply the different grounds, the details of the etching process, and the various techniques that form the basis of etching” (Bailly-Herzberg, p. 22, translated by us). Many artists did just that. Janine Bailly-Herzberg mentions Degas in particular, who would make sketches of dancers from observation, and would then visit Cadart to etch his sketches on a copperplate. Vollard also tells us that Degas would create monotypes at Cadart's atelier, sometimes highlighting them with pastel.

Among the thirty or so etchings exhibited in the glass display cases between the large windows are the titles of two publications: a Treatise on Etching, which emphasises the pedagogical aims of the premises, and L'Ancien Paris, an important series of views of Paris, in which Martial-Potémont recorded the changes that the capital was undergoing.  This publication, which included 300 etchings, was the artist's first great success.