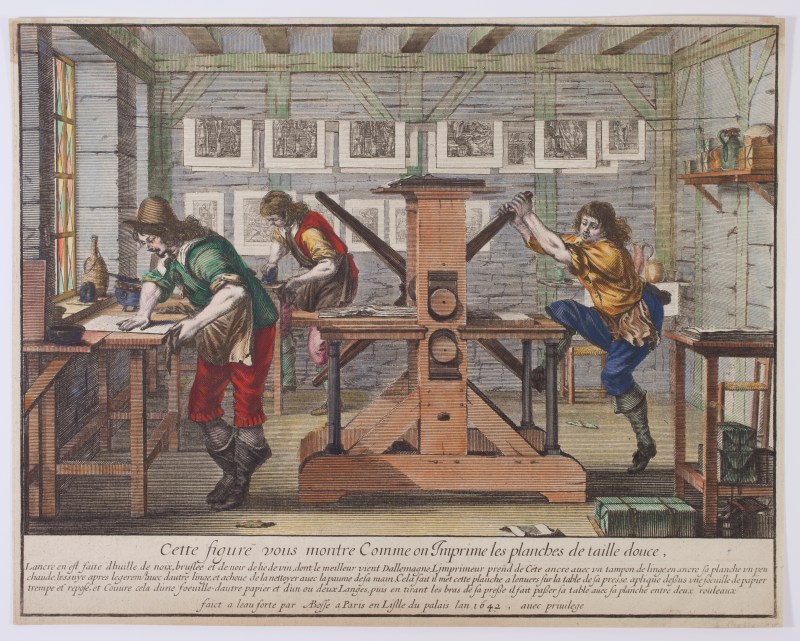 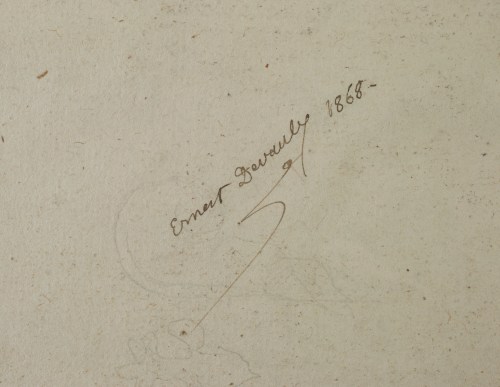 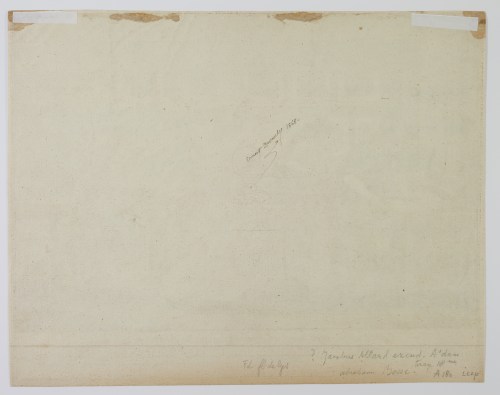 Very fine impression printed on heavy laid watermarked paper (indistinct watermark) and coloured with gouache. Thread margins all around the platemark. Flattened horizontal fold in the letter bottom, light stains from old glue in the corners and along the upper border.

Provenance: Ernest Devaulx (1831-1901): his signature on the back followed by the date of acquisition 1868. "The objective of this collection of prints was to establish a general Dictionary of engravers and lithographers of all times and all countries, for which he wrote about 30,000 cards that were never completed. Under his first name Théophile, or under his name Th. Devaulx, he wrote articles on printmaking and bookplates in La Curiosité universelle, La Revue des Arts Décoratifs, La Revue des collectionneurs d'ex-libris, L'Estampe moderne. Many prints, on which the signature of the amateur appears on the back, followed by a date, are today in museums such as the Museum of Fine Arts in Boston, the Bibliothèque nationale de France, or the British Museum in London, to name but three." (Lugt 670, translated by us).

Very few prints by Abraham Bosse that we know of are coloured. An impression of The Pastry Shop (Lothe 249) in the Getty Research Institute in Los Angeles is coloured with gouache and gold. In addition to the address of Melchior Tavernier, its first publisher, it bears the address of Jacobus Allard, a publisher of maps and prints active around 1660 in Amsterdam, about whom very little information seems to have survived. This state of The Pastry Shop at the address of Jacobus Allard is not described in the catalogues raisonnés. Prints by Bosse are known to have been copied by Dutch engravers and publishers: for example, The Schoolmaster and The Schoolmistress, engraved around 1638, were copied in the Netherlands by an anonymous engraver and published by Claes Jansz. Visscher in 1645. This proof of The Pastry Shop, which is not a copy, demonstrates that the many Dutch publishers who were active in Paris at the time and had commercial and family ties with French engravers and publishers, could have been in possession of original plates of Bosse's engravings.

Our impression of The Intaglio printmakers bears no other name than that of Abraham Bosse. The colours and the way they are applied on the print are similar to those of the coloured impression of The Pastry Shop, and both prints could come from the same colourist's workshop. The bluish grey of the stone walls, the carmine red, the blue-tinged green, the orange-yellow of the clothes, the brown of the wood are similar, as well as the colour used for skin and the red highlights on the cheeks of the subjects. The colourist managed to keep the light shadows and soft light of the print, by choosing hues that emphasise the important details in the image: the three printers, the central press, and the engravings with white margins that are drying on lines in the background.

It is difficult to say when the colours were applied. In the chapter Colouring Prints of his book The print before photography: an introduction to European printmaking 1550-1820, Antony Griffiths explains that colours were applied before the sale most of the time, with the publisher deciding to have his wife, his children or a colorist colour in some freshly printed impressions. A customer or a reseller could also sometimes have colours added to a print. The address of Jacobus Allard on the proof of The Pastry Shop at the Getty Research Institute may be a clue. Suzanne Dackerman and Thomas Primeau have shown that "painted prints" had been common in Germany and the Netherlands since the Renaissance.

The Intaglio printmakers is one of the most famous prints by Abraham Bosse. He was then working on his important Traité des manières de graver en taille-douce sur l'airain par le moyen des eaux-fortes et des vernis durs et mols. Ensemble de la façon d'en imprimer les planches et d'en construire les presses [A Treatise on the methods of intaglio printmaking, to etch images on copper by means of acids as well as hard and soft grounds, together with an explanation of the manner of printing such plates and of building presses], for which he obtained a privilege in 1642 and which he published in Paris in 1645. It was the first technical manual of intaglio printmaking. It was a huge success, and was translated and widely disseminated in the following years in Germany, in the Netherlands and in England; it was reprinted several times, with additions by Sebastien Leclerc and then by Charles-Nicolas Cochin in the XVIIIth century.

The Intaglio Printmakers, or more accurately Cette figure [qui] vous montre Comme on Imprime les planches de taille douce [This Image [which] Shows How Intaglio Plates are Printed] and that of Graveurs en taille douce au Burin et à Leaue forte [The Engraver and the Etcher], etched one year later, stem from the same pedagogical objective. The letter reads: "This figure shows you how intaglio plates are printed / The ink is made of burnt walnut oil and wine black, of which the best comes from Germany. The printer takes some of this ink with a cloth pad, inks his plate while it is somewhat hot [see at the bottom left], wipes it lightly with other cloth(s), and finishes cleaning it with the palm of his hand [see left]. Once this is done, he puts this plate upside down on the table of his press, applies on it a sheet of paper soaked and then let rest for a while, and covers it with another sheet of paper and one or two pieces of cloth, then pulling the arms of his press, he pushes the table with the plate between two rollers." (Préaud, p. 226, translated by us)