Frans FLORIS (after): Men and Women at a Bath 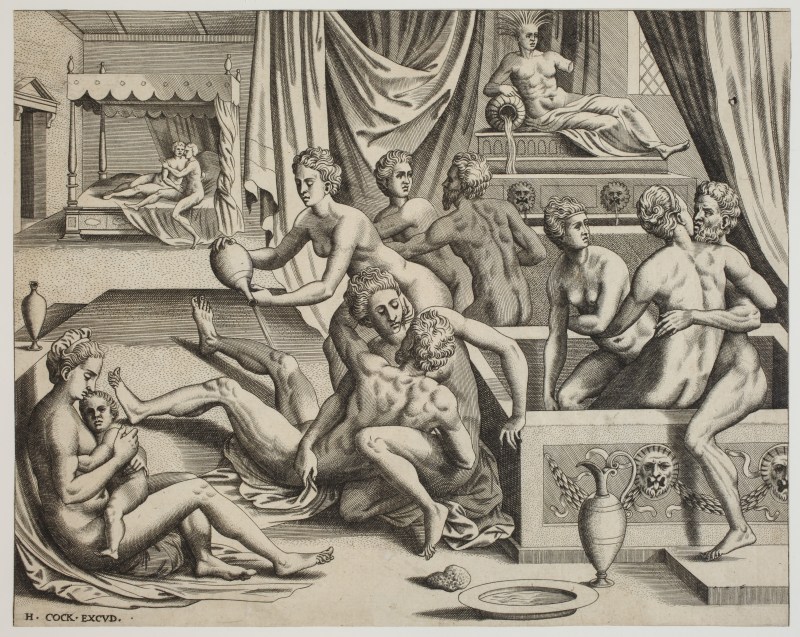 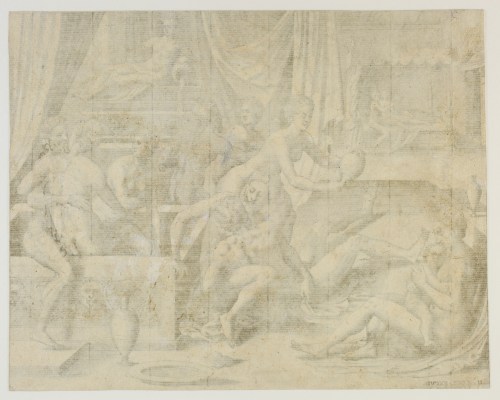 Very fine impression printed on laid watermarked paper. Watermark: Hand with four fingers together and the thumb separate, with a heart and a crown. Similar to Briquet 11332 (Tours, 1557). Trimmed on the borderline on three sides and just inside the borderline bottom, without loss of image or text. A very tiny (5 mm) repaired tear in the upper left corner, a few rare small thin areas on the reverse. The tiny black circle in the curtains in the upper right corner results from a defect in the copperplate.

Rare. An impression of the 1st state and one of the 2nd state are at the Albertina, Wien.

The engraving does not mention the author or the engraver. The name of Luca Penni has been mentioned, but the composition is generally attributed today to Frans Floris, notably by Edward H. Wouk, a specialist in the work of the Antwerp artist, and the author of the New Hollstein volumes devoted to him.

The theme of the licentious bath is common among the works of the Fontainebleau school, such as Venus climbing into the bath with Mars, engraved by Antonio Fantuzzi after a lost fresco that Francesco Primaticcio had probably painted for the sixth or seventh room of the Appartement des Bains at Fontainebleau. (Jenkins AF 68). Among the scenes of nymphs in the bath, whether or not accompanied by Venus or satyrs, let us mention Venus Bathing Attended by Nymphs, engraved by Jean Mignon after Luca Penni (Jenkins 34) and Women Bathing by the same engraver, after another composition by Luca Penni (Jenkins 46). In these two engravings, as in Men and Women at a Bath, the scene is set in an interior with a similar décor: draperies, bath accessories on the floor (dish, sponge, ewer, bottle of oil...). Let us also mention Men and Women Bathing by Giulio Bonasone (Bartsch 177) where Stefania Massari recognizes Venus, Mars and Cupid, after a drawing by Raphael.

Although the antique decor and the presence of a statue of the river god in the background indicate Italian and Fontainebleau influence, the spirit of the scene differs from mythological or mythologically inspired compositions. Dorle Meyer, in her entry in the exhibition catalog Gott & die Welt - Niederländische Graphik des 16. Jahrhunderts, explicitly titles this print Badebordell [Bath scene in a brothel]. Although the bathing accessories are within easy reach, it is clear that the group of figures are not busy washing themselves, as made obvious by the couple embracing on a bed in the background. Dorle Meyer interprets this wholly as a scene of prostitution, recalling that, from the very beginning, public baths in the Netherlands were notorious places of prostitution where maids offered their services to customers. She points out, however, that at the time the scene was engraved, many of the baths had been closed for reasons of morality and hygiene, so that the print would have a moralizing rather than a documentary purpose.