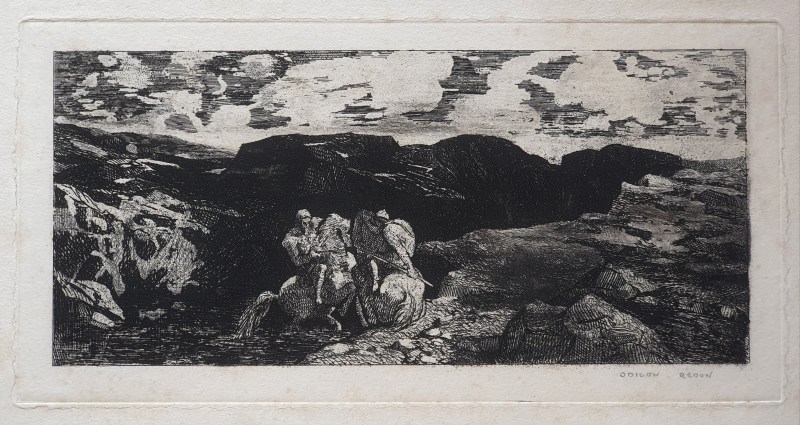 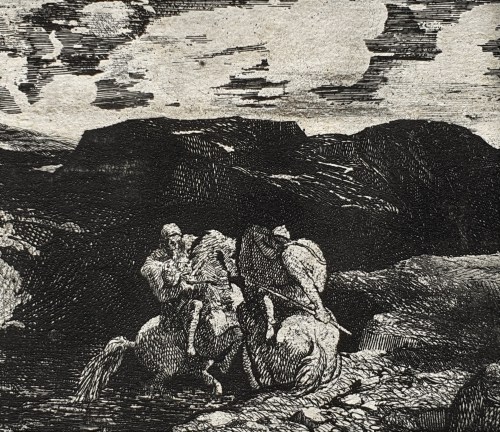 Extremely rare impression, before the second state described by Harrison: before the whole upper half of the plate was modified, before the addition of new works in the lower part and of the signature O. REDON onto a rock, bottom right.

The first state described by Harrison is known through one impression only, “in collection David Tunick, Inc., New York (ex-coll. Richard Bühler, Winterthur), with penciled signature "Odilon Redon" in small capitals lower right” (Harrison). According to Harrison, the first state, that is, the impression in the David Tunick collection, is “Nearly complete except for the sky. ‘Od. Redon’ lightly etched lower left platemark”.

There is a photograph of the impression belonging to David Tunick in the catalogue raisonné by Harrison, but its quality is not good enough to allow comparison with our impression. It is possible that our impression has some new works in the sky and on the rocks, and that the borderline is better defined. This could only be clarified by comparing the two impressions. On our copy, we cannot see the signature ‘Od. Redon’ in the lower left platemark, but perhaps it wasn’t inked.

Only two impressions from the second state are known, one in the Rijksmuseum, Amsterdam, the other one in the Art Institute of Chicago. The third state, in which the plate has been cut down by a third lengthwise on the right side, was printed in 1886; 30 impressions were made, signed in pencil. A posthumous print run was made in 1922, at the request of Madame Redon.

Very good general condition. Some foxing in the margins; the platemark, slightly fractured on the right and left edges due to sustaining too much pressure during printing, has been repaired. Some tiny areas of paper skinning verso.

Horsemen in combat is part of a group of etchings Odilon Redon made while he was learning engraving with Rodolphe Bresdin. Several of these etchings feature the same gloomy, barren landscape of menacing rocks, errant  or fighting horsemen and stormy skies.

Peter Morse highlighted the influence that the epic poem The Song of Roland had on Odilon Redon’s first etchings. It has been established that he knew the poem very well. He was fascinated by the landscapes of the French and Spanish Pyrenees and had travelled there; he travelled to Roncevaux, where Charlemagne’s nephew died, according to legend; he painted Roland at Roncevaux in 1862 (today in Bordeaux’ Museum of Fine Arts). According to Peter Morse, Horsemen in combat could illustrate a specific episode of the Song of Roland: « These two battling knights may well be the emperor Charlemagne and the Saracen emir Baligant in their climactic struggle. The cavalier at the left is bearded, as Charlemagne was said to be. The knight at the right is wearing a helmet of Moorish style. They are entirely alone, and the epic says that all fighting ceased on the whole battlefield when the two leaders began to fight, leaving them to determine the outcome for all. » However, Peter Morse adds that this interpretation should not be reductive: « Redon undoubtedly wished his etching to be considered as pure art, not as illustration . We can continue to look at it in his way, while gaining still more appreciation by surmising its origin". (The Etchings Of Odilon Redon, foreword, pp. XI-XII).