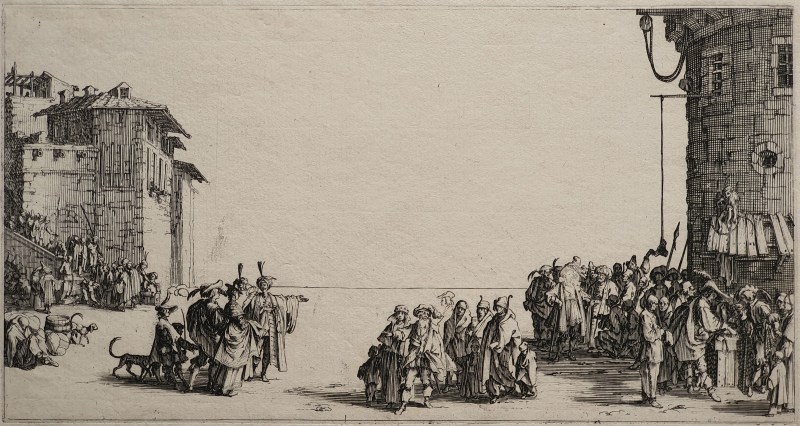 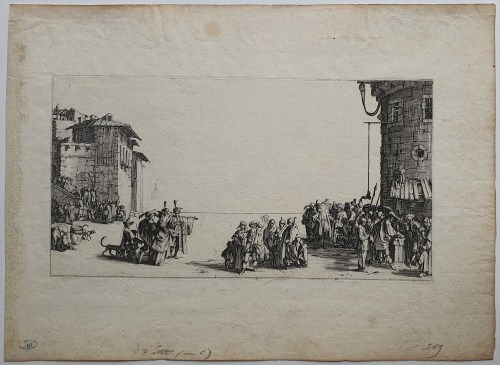 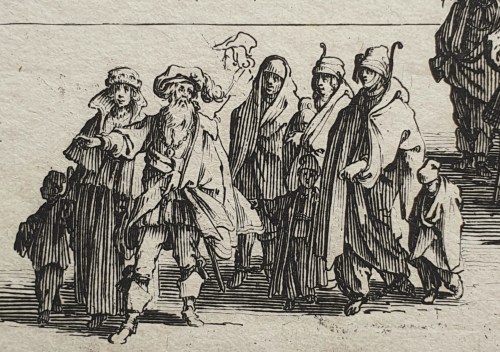 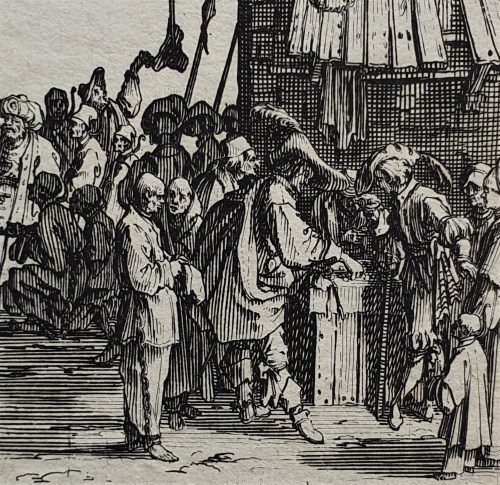 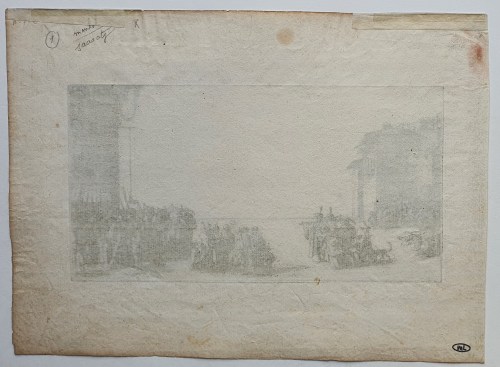 Rare impression of the 1st state (of 6) before the figures were finished and before the view of Paris was added in the background. « Only the first state was done entirely by Callot, the later states were completed by another hand » notes Lieure, who marks this first state with RR (‘very rare’).

Very fine impression printed on laid paper. Generally in very good condition. Some discoloration in the margins. A very tiny tear in the upper right corner of the sheet. With exceptional wide margins (sheet: 202 x 273 mm).

Jules Lieure gives this description of the first state of The Slave Market: “In the foreground, the artist engraved three groups. The most important, standing next to a tower on the right, is a group of slave traders; a buyer is putting money down on a table, probably the price of the slave who is waiting behind him, with his cap in his hand and shackles around his ankles. Further away, an important buyer rests his right hand on a staff, his face only a light stroke. The group in the middle shows characters followed by the slaves they have just bought, their feet still shackled. The group on the left looks as if it is walking towards the slave market, led by a figure whose Oriental dress resembles that of the characters in Soliman (Cat. 363-368).” (our translation)

Jules Lieure disagrees with Mariette, who thinks the background that was added in the second state, the Small View of Paris, is by Callot’s hand: Lieure deems that engraving much clumsier than the first state. He also notes that in 1629, the date inscribed on impressions from the second state, it would have been impossible for Callot to draw the Tower and the Gate of Nesle with so many gross errors (Lieure notes several mistakes in perspective and detail), when around the same time he would have been sketching his two extremely precise large views of Paris (Lieure 667 and 668). Lieure also notices that, on one of the houses on the left in the foreground, the roof has a covered terrace similar to those seen in Italy: this doesn’t fit in well with a view of Paris. Finally, he notes that the original preparatory drawing for the Slave Market (kept in the Mariette collection in the Louvre under the title “Marchands et foule sur les quais d'un port” [Merchants and crowd on the quays of a port]) shows a sea port with ships, which he thinks might be Livourne, and not a view of Paris. Lieure suggests that Callot hadn’t finished his copperplate and that it might have been the publisher, Israël Henriet, who engraved the background, or had it engraved, after Callot’s death, and that he added the 1629 date, thought to correspond to Callot’s stay in Paris. Lieure concludes that “the first state is to be preferred, being the true work of the master”. (our translation)