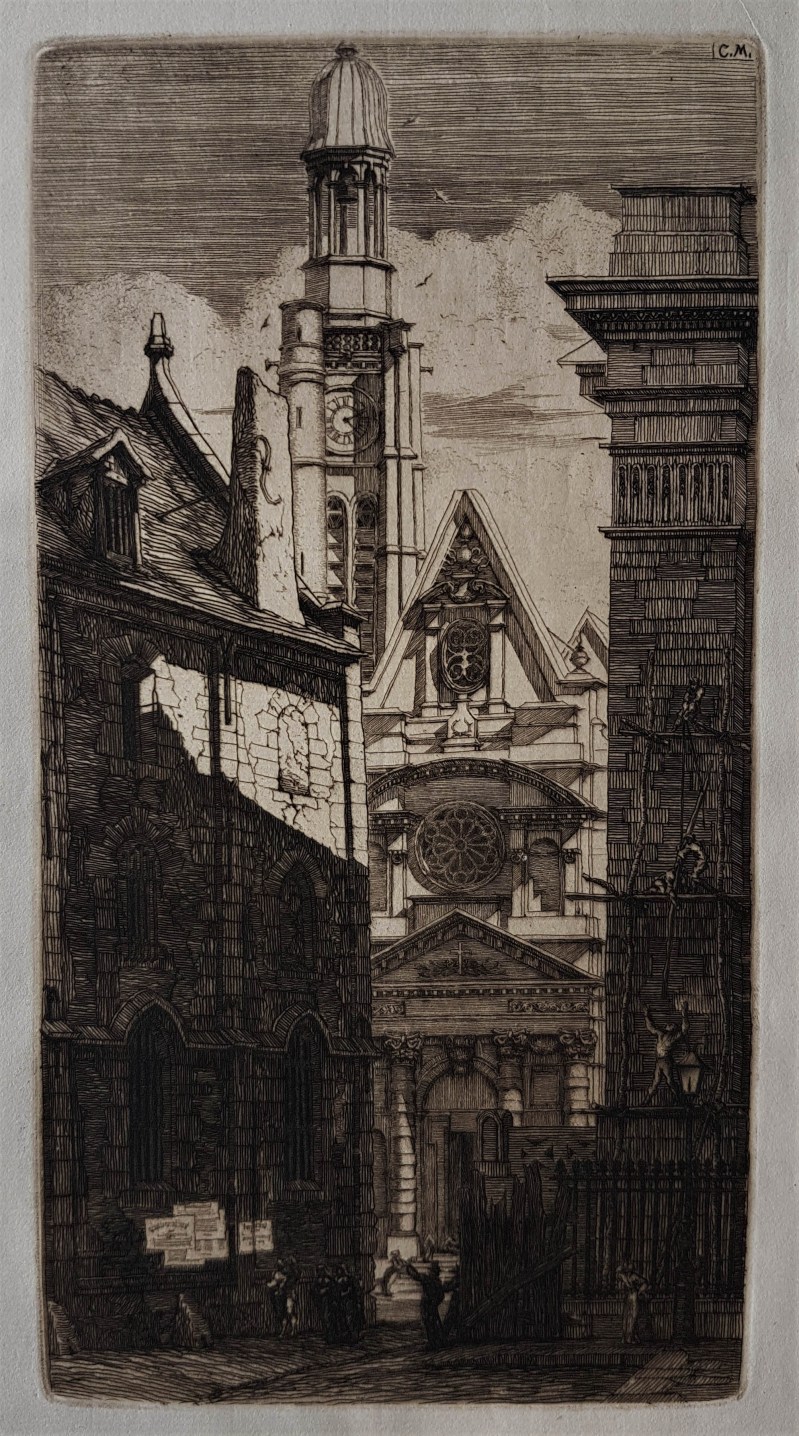 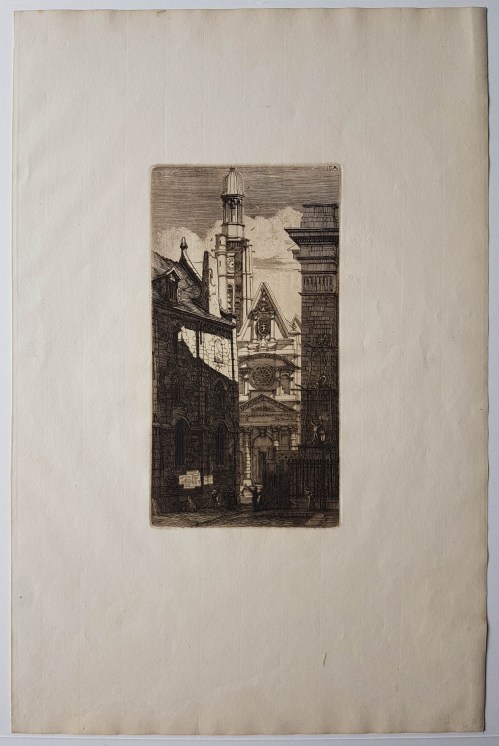 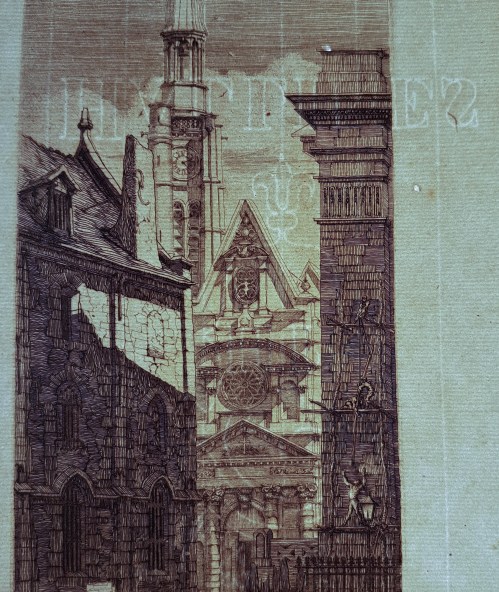 Impression of the 6th state (of 8), the workman on the first platform of the scaffold redrawn, his arms held wide apart, but before the addition of an additional poster on the left wall and the inscriptions on the top of the Pantheon.

Rare impression. Richard S. Schneiderman only listed two impressions of this state in the 97 collections he surveyed: one is at the Detroit Institute of Arts (Detroit, Michigan), the other in the collection of Frank W Raysor II, in New York.

Saint-Étienne-du-Mont is one of twelve prints in the series EAUX-FORTES SUR PARIS etched by  Meryon between 1850 et 1854. Work on this project coincided with a house move:

“In 1850, Meryon left his lodgings in the rue St André-des-Arts, to move to the rue St Etienne-du-Mont — in the house that bears his monogram on the plate representing the Collège Henri IV — “a flat in which dark rooms followed one after the other like cabins between decks on a ship” [Burty, La Nouvelle Revue]. It was in this “dark” flat that he produced the work that remains one of the most unexpected and surprising manifestations of the specific genius of etching: the series EAUX-FORTES SUR PARIS. » (Loys Delteil, introduction, p. 4, our translation).

Meryon moves into the house at number 26, rue Neuve Saint-Étienne-du-Mont (today rue Rollin, near the place de la Contrescarpe): this neighbourhood is thus familiar to him when he represents it in 1852 in his print Saint-Étienne-du-Mont; its vertical and narrow format is the same as that of Tourelle, rue de la Tixéranderie [Tower, rue de la Tixéranderie] (Schneiderman 24), another print in the series Eaux-fortes sur Paris. The composition however is different. While in Tourelle, rue de la Tixéranderie, the view over the street is unobstructed and the tower in the centre of the picture is entirely visible, in Saint-Étienne-du-Mont, the façade of the church in the centre is partly hidden, to the left by one side of the Collège de Montaigu, and to the right by the angle of the Panthéon. The picture thus brings together three buildings with very different recent histories. The church of Saint-Étienne-Du-Mont had changed little since the 17th century, illustrating a certain continuity in the appearance of Paris. On the contrary, the old Collège de Montaigu, founded in 1314, was for the most part demolished between 1844 and the beginning of the 1850s, to allow the construction of Sainte-Geneviève Library and the widening of the square: the collège on the left of the print is thus only a ruin awaiting its impending destruction. Building works on the church of the Panthéon, designed by Soufflot a century earlier, had started when Louis XV laid the foundation stone in 1764, but ended under the Revolution during which the church became a Republican temple, before being reconsecrated as a Catholic church, and then deconsecrated again to become a temple dedicated to the memory of “great men” under the July Monarchy, and finally reconsecrated as a church by Napoléon III in 1851.

Meryon's print shows ongoing construction work through the scaffolding raised at the end of the northern arm of the transept, where builders are hard at work, as if conjuring up the turbulent history of the monument.

In the plate's 7th and 8th states, Meryon adds inscriptions to the pinnacle of the Panthéon's roof: in the 7th state, the text ST ENE DU MONT ET L’ANCIENNE BIBLIOTHEQUE STE GENEVIEVE [Saint-Étienne-du-Mont and the former Sainte-Geneviève library] reminds the viewer that the Collège de Montaigu became a reading room during the construction of the new library, which opened in 1851. In the 8th state, Meryon chooses to remind us instead of the origin of the building: ST ENE DU MONT ET L’ANCIEN COLLÈGE DE MONTAIGU [Saint-Étienne-du-Mont and the former Collège de Montaigu]. This extreme preoccupation with historical accuracy even tried the patience of Baudelaire, even though the poet had a deep admiration for Meryon's etchings, at a time when he tried to collaborate with the engraver to publish the views of Paris:

“Delâtre asks me to write some text to go in the album. Well, isn't that an opportunity to daydream, in writing, over the course of ten, or even twenty or thirty lines, inspired by beautiful prints: the philosophical musings of a Paris flâneur. However M. Meryon does not share this opinion and starts interfering. One must say: to the right, you can see this; to the left, you can see that. One must look up notes in musty old books. One must say: this building originally had twelve windows, which the artist chose to render as six; and one must go up to the Hôtel de Ville and ask after the exact date of the demolition. M. Meryon talks and talks, looking up to the ceiling, and does not pay attention to a word one says.” (letter to Poulet-Malassis, 16 February 1860, our translation).

Meryon's deep attachment to a Paris that is disappearing under his very eyes is obvious in the whole series Eaux-fortes sur Paris; he calls it, in an invoice he writes out in 1866, his “suite des vues anciennes de Paris” [series of views of Old Paris] (as quoted by Loys Delteil).