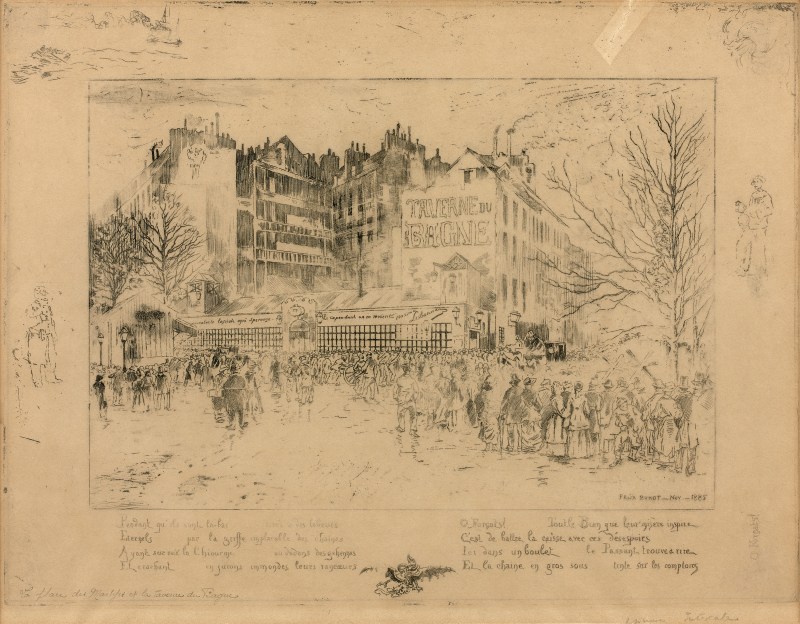 [The Place des Martyrs and the Jailhouse Tavern]

Bourcard calls ‘effet de jour’ the 1st state (pure etching before aquatint) and ‘effet de nuit’ the 2nd state after some further work, particularly in the sky. In the additions to the catalogue raisonné of Buhot, J. Goodfriend corrects this distinction: he explains that some impressions of the 1st state can be called ‘effet de nuit’, but that this effect was obtained with plate tone, not with further work. In our impression, the ‘effet de jour’ was obtained through a good wiping of the plate, in the sky as on the whole plate.

We must point out that several impressions sold in auctions sale or displayed by museums are told from the 1st state although they present many horizontal lines etched in the sky. These lines don’t appear in our impression.

J. Goodfriend displays on his website a proof annotated by Buhot Premier état (une vingtaine d’épreuves) [First state (about 20 impressions)] on which these lines appear in the sky, as well as on the impression of the National Gallery of Art, also annotated Premier état by Buhot, or on the impression displayed by Arsène Bonafous-Murat in his Félix Buhot catalog (January 2004, no. 285, impression reproduced in the catalog).

In these impressions, the further work of the second state (in particular the further sketches in the margins) doesn’t yet appear; we must assume that there was at least four states and that our impression must be from a state before the impressions annotated Premier état by Buhot. The description of the first state made by Bourcard could fit our impression, but it isn’t precise enough.

Besides, our impression is printed on a paper soaked with turpentine (papier essencé) as showed by the yellow color of the paper and the annotation in pencil epreuve intercale. Buhot particularly valued the impressions of his prints printed on papier essencé. G. Bourcard explains that « when Buhot printed his proofs on papier essencé (it is on paper soaked with turpentine), he often printed 3 impressions, that he called as follows: 1) la directe 2) l’intercale 3) la contre-épreuve. The first was obtained from the plate inked as usual; the second was obtained from the plate without re-inking; and the third was obtained from the directe impression yet wet and being passed through the press with another sheet of paper » (Félix Buhot, Catalogue Descriptif de son Œuvre Gravé, with additions and revisions by J. Goodfriend, New York, 1979, p. XVII).

Margins slightly yellowed. A crease that enters the subject by 30 mm bottom right, backed with a piece of paper verso (slightly visible recto). Small tear in the bottom margin.

This etching was dated from November 1885 by Buhot, it is several days after the opening of the Taverne du Bagne, on October 6 1885, by Maxime Lisbonne, a former Communard back from the penal colony. This inn was at the corner of the Boulevard de Clichy and the Rue des Martyrs in Paris.