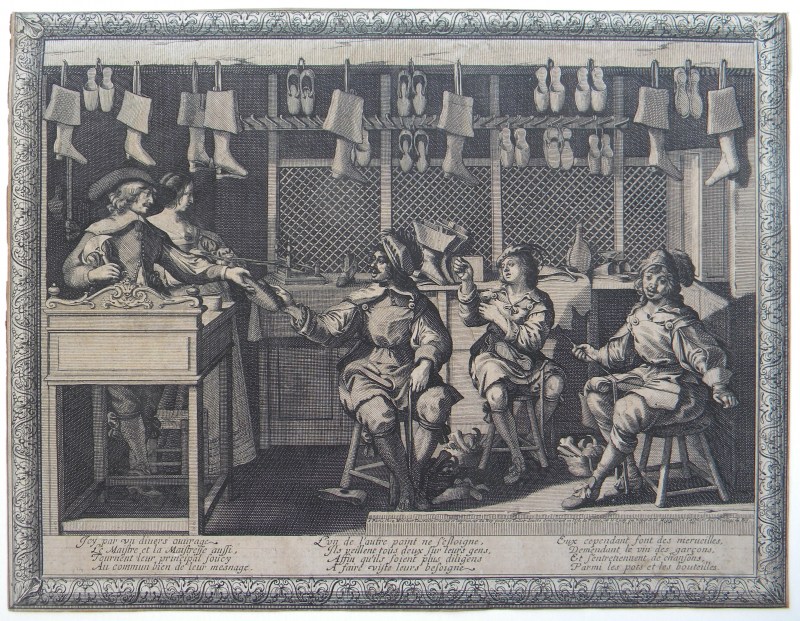 Impression trimmed on or 1 mm outside the borderline.

Slight staining of the paper. Very slight central fold due to the printing. Two tiny foxmarks. Otherwise in good condition.

Le Savetier (The Cobbler) belongs to the series of 7 prints representing professions, which was very successful as soon as it was published. Next to Le Savetier, the series also features La Saignée (Bloodletting), Le Clystère (Enema), l’Étude du procureur (The Prosecutor's Office), le Cordonnier (The Shoemaker), le Barbier (The Barber) et le Pâtissier (The Pastry Chef).

Le Cordonnier represents the crafstman calling at the house of a lady and helping her try on different pairs of shoes. The ambiguity inherent in the scene is the focus of the print, and is the subject of several innuendoes in the text. In Le Savetier on the other hand, it is the profession that is the principal subject matter of the print. Abraham Bosse's print frames the craftsman's shop, which doubles as his workshop. Three employees work under the supervision of the master and his wife, who participate in the task themselves: he is cutting out the leather with a round knife and she is preparing the thread.

The detailed representation of tools and equipment (compass, bone folder, punches, knives, aprons, hand leathers) does not detract from the vivacity of the scene, as evidenced by the wide gestures of the characters, who are hard at work. The shoes and boots lined on the ceiling or carefully presented in the display are the latest fashion: Sophie Join-Lambert points out that, at the time, boots had just become acceptable to be worn in fashionable salons, instead of being seen as purely military footwear, as had previously been the case.

The three lines of verse on the lower blank part are a quick socio-economic sketch: the couple's union is reinforced by their participating in the common good of the household, the prosperity of their shop rests on the productivity of the workers, and the workers' good spirits are buoyed by wine and song:

“Here by means of diverse tasks / The Master and Mistress too, / Turn their principal care / Into the common good of their household. // One never ventures far from the other, / They both watch their employees / To make them more diligent / And faster at their work // They work marvels, / They ask the boys for more wine, / And entertain themselves with song, / Amid the pots and bottles.”