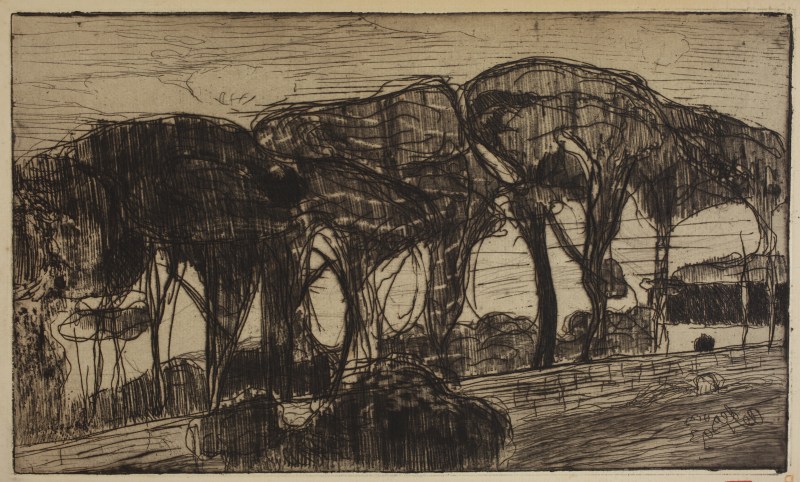 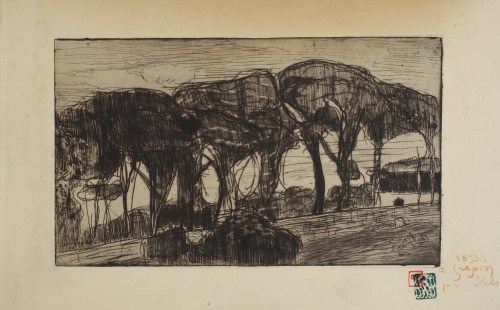 Generally in good condition. Paper slightly foxed in the upper margin and strong foxing on the reverse of the sheet. Two small holes due to an hook in the middle of the upper margin. Good margins (sheet: 280 x 400 mm).

Provenance: Henri-Gabriel Ibels (1867-1936), painter, engraver and poster artist, member of the Nabis group together with Seguin, and nicknamed the "Nabi journalist".

Field, Strauss & Wagstaff gave this etching the title The Pine trees. The title Les Sapins appears on the list of Seguin's prints exhibited at the Galerie Le Barc de Boutteville in February 1895, number 47 (announced edition of 15 impressions). This title is obviously wrong: the trees represented by Seguin on this print are clearly pines, not firs. Field, Strauss & Wagstaff list two impressions: one in the Bibliothèque nationale de France and a second from the former O'Conor and Pierre Fabius collections. There is no reprint of this etching.

Henri-Gabriel Ibels was one of Armand Seguin's oldest friends. He evoked in his diary the time when they were both students in Paris: "In 1887, we were sat next to each other on the worm-eaten benches of the old School of Decorative Arts, rue de l'École de Médecine. He was fatherless, his mother had died young. He lived with his remarried stepfather, in an appalling environment. [...] My father, who was rich at the time, liked to help young artists. He paid for a stay in Normandy for us both and Seguin was able to paint. It was during the years 1888 and 1889 [...] that we made our first sketches together, our first paintings, that we exchanged our first impressions as art students in front of nature." (Henri-Gabriel Ibels, Journal, quoted in Armand Seguin, Musée de Pont-Aven, 1989, translated by us). The year 1889 was also the year of the so-called Volpini exhibition, which had been organized by Gauguin and brought together works of the "impressionist and synthesist group". This exhibition made a great impression on him and Seguin took up engraving the following year.