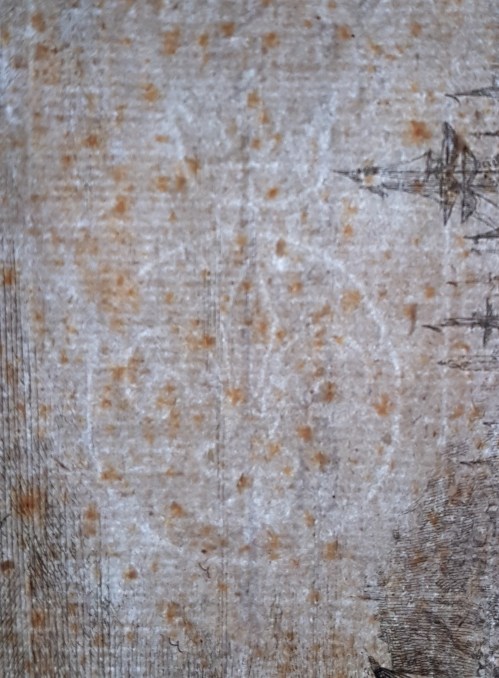 Impression of the 3rd state (of 6) with the scratches still visible in the upper right corner, but before the tiny horizontal lines to the right of the large tower and before the vertical scratch at the centre of the top edge (4th state).

Fine impression printed on laid watermarked paper (Fleur-de-lys in a crowned circle, quoted by Mannocci for impressions of the 3rd state). In very good condition. Tiny light foxmarks. Some inscriptions written in pencil on the reverse of the sheet. Thread margins all around the platemark.

The preparatory drawing for this print is kept in the Uffizi Gallery in Florence. Lino Mannocci noted on its front the incision marks that were used to transfer the drawing onto the copperplate.

The light of the setting sun stretches the shadows of the figures and bathes the harbour in diffuse brightness. Claude Gellée succeeded in rendering this evening atmosphere by removing or softening with a burnisher certain details that were too sharp in the first state, in particular in the sky and on the towers on the left, at the level of the windows still hit by the sun. One thinks of the diffuse blond light of the setting sun that suffuses the sky, the buildings of the harbour, the ships and the characters on the quay of Port de mer au soleil couchant [Sea Port at Sunset], painted by Gellée in 1639, kept in the Louvre Museum.