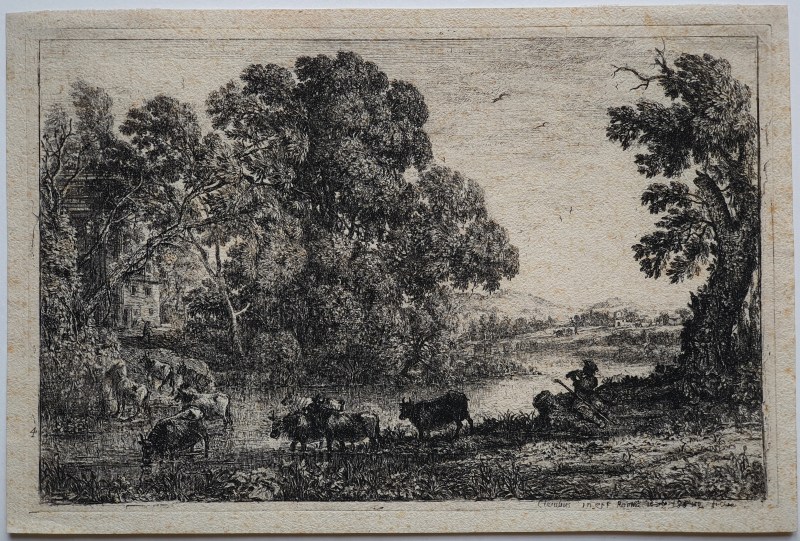 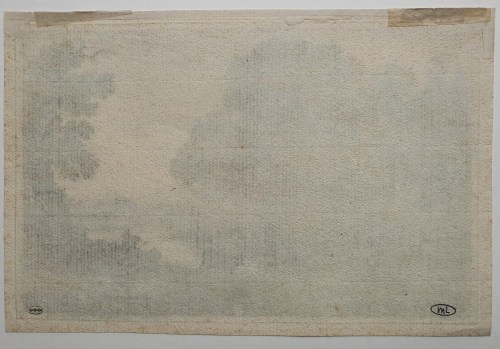 Provenance:  former Arkady Nicolayevitch Alferoff collection (1811-1872) with his stamp on the back (Lugt 1727). The print is described under number 251 in Catalogue de la collection magnifique et d'un choix exquis d'estampes, d'eaux-fortes et de bois, sale of 10-13 May 1869: “251. The Cowherd. (R. Dum. 8) Superb impression from the second state, before the bird, near the middle of the image, was covered in lines; with margins. Very rare. (Coll. Simon)” (our translation); the collection mentioned in this catalogue entry is that of Auguste Simon, born in 1776; formerly in the Marcel Lecomte (1916-1996) collection, his stamp on the back (Lugt 5684).

“With unfailing regularity, students of Claude’s etched work have found in this print the highest manifestation of Claude’s genius as an etcher.” To this judgment, Lino Mannocci adds several quotations, one of which, by Francis Seymour Haden, seems particularly apt: not only because Seymour Haden himself tirelessly made etchings of landscapes, but also because he collected old master prints. This quote comes fom the introductory text that prefaces the catalogue of his collection: About etching: Notes by Mr. Seymour Haden on a collection of etchings by the great masters lent by him to the Fine Art Society’s Galleries to illustrate the subject of etching. Seymour Haden writes: “The greatest of all Claude’s etchings seems to me to be the ‘Bouvier’. In quality it is surprising, and in touch, magical – one never tires of wondering at it. Though highly finished it has the true ring of an etching, and in its texture it is what the printers of steel engravings would call ‘a rotten plate’. It need scarcely be said that this rottenness is its chief recommendation.” (About etching, 1878-79, p. 32-33). Seymour Haden is referring here to the very peculiar treatment that Claude Gellée gave to the copperplate, and in particular his unconventional use of tools and acid to bite into the copper, making it rougher in places and creating textures that would horrify those who love the clean strokes and neat surfaces of steel. Claude Gellée is thought to have used pumice stone to scratch the copper, or some form of roulette instrument. He might also have used, in between two stages of the work, a specific ground that only protected the finest strokes: this would have enhanced the effects of the acid on larger strokes, and would have greatly accentuated the contrast between the full light, and the shadow in which the cowherd is resting. However, finer strokes are soon erased by the printing process, and as a result only the first impressions, very rare, like this one, show this contrast faithfully.