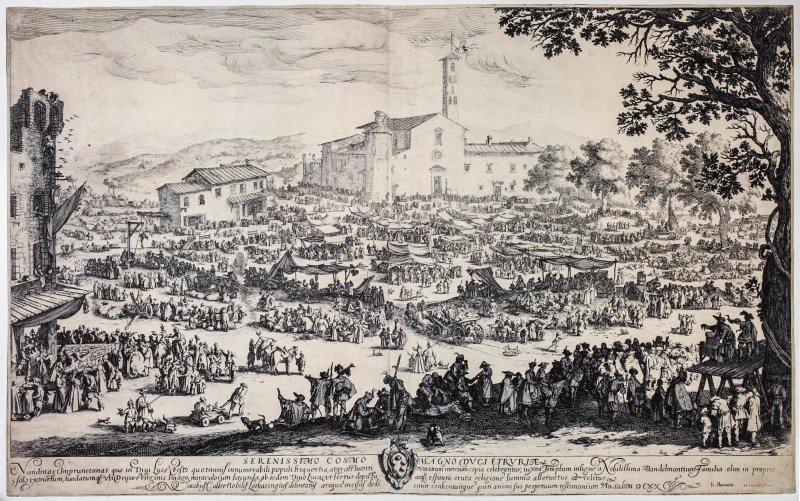 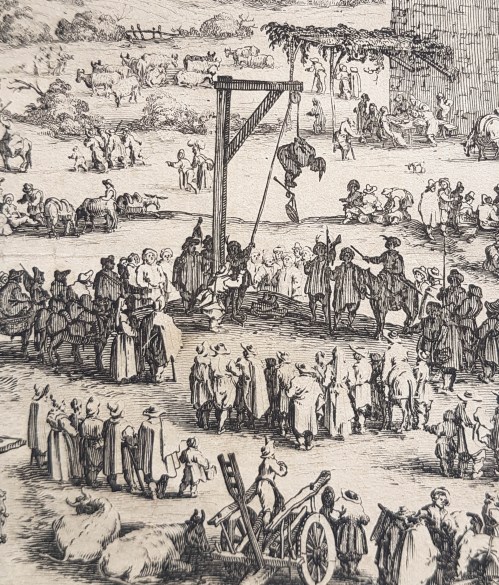 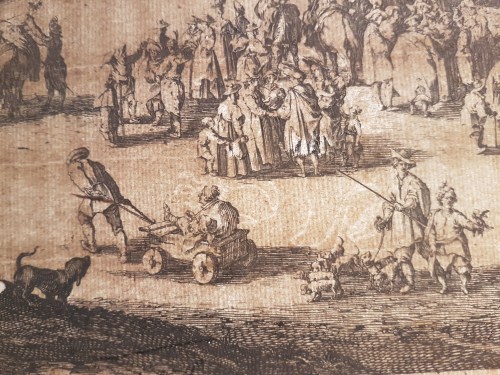 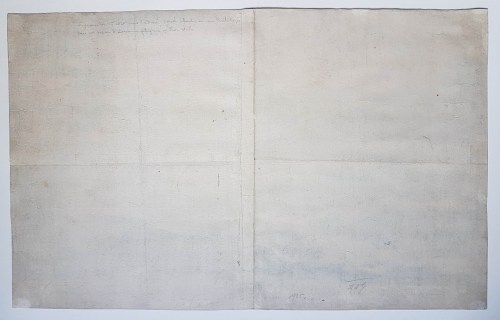 [The Fair at Impruneta]

Impression of the 1st state (of 2) before Israël Silvestre’s address bottom left.

Fine impression. The most distant mountains are starting to wear down but are yet visible. The image is printed on two joined sheets of watermarked laid paper (Lion and Star, close to Lieure 38, typical of of the 1st state according to Jules Lieure; and an illegible countermark within an oval). Impression trimmed on or 1 mm outside the platemark. Generally in very good condition. Paper very slightly yellowed, small thin areas in the corners of the sheet verso, a tiny (diameter 4 mm) surface abrasion bottom center in the subject.

In October 1619, Jacques Callot attended the fair and ceremonies for the feast of Saint Luke, which drew huge Tuscan crowds every year to the village of Impruneta, near Florence. He made a large number of sketches from life, kept today in the Uffizi in Florence: “With these sketches,” writes Jules Lieure, “Callot created a masterpiece: all these prodigious details, brought together, create a prodigious whole.” (our translation) The plate was published in 1620 in Florence. It was so popular that Callot re-engraved it a second time in 1622, after his return to Nancy.

The Fair at Impruneta is both a masterpiece of engraving, and an important document on Tuscan society in the 17th century. Gottfried Kinkel, quoted by Jules Lieure, attempted to describe it in this way:

“In the foreground are merchants’ tents and open air inns, stalls selling plates and crockery, tumblers and all manners of earthenware utensils, a liquor seller and a quack delivering his sales patter to a large audience. Further to the back, spectators form a circle to watch dancers, there is a tooth-puller, a town crier on horseback with a trumpet, a donkey-driver leading his herd of donkeys, a livestock market and all manners of men and beasts… Finally, right at the back, rises the church of Impruneta, in front of which a procession advances with a cross and a canopy. The whole scene is peaceful, steeped in that carefree Italian joy; only thieves and liars are having a bad time. One tried to use fake weights: there he goes, with his scales attached to his back, legs and hands, he is being hoisted up on a rope, hanging from his arms. Another rascal has been taken to the pillory and is being roundly abused by onlookers. Surely nobody has ever attempted to count the men and beasts in this print; there are probably a thousand!” (our translation)