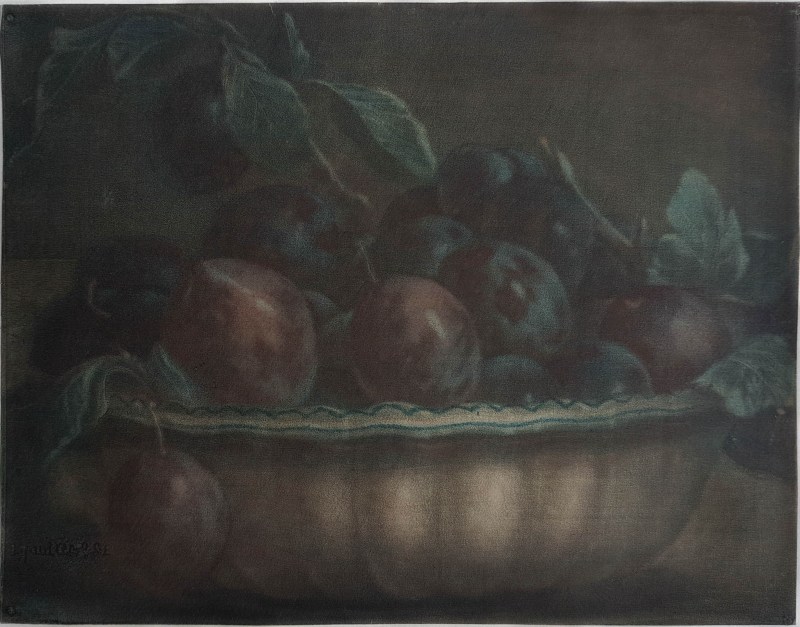 Very fine impression printed on laid paper, trimmed on the platemark. In good overall condition. Tiny (4 mm) tear on the upper edge and small thin areas on the edges on the reverse.

In the December 1741 issue of the Mercure de France, p. 2926, was announced the availability for sale of ‘21 prints or colour prints’ by the ‘Sr Gautier, from Marseille’, including ‘Un Tableau, représentant des Prunes dans un Bassin, même grandeur [grandeur de toile de 4] Prix 1. liv.’ [A Painting depicting Plums in a Dish, same dimensions [in the size of a canvas of 4] Cost 1. liv], together with ‘un Autre, représentant des Pêches, tous les deux par l’Auteur, même grandeur, Pendant au précédent. Prix 1. liv.’ [Another painting depicting Peaches, both of them after pictures by the Author, same dimensions, forming a pair with the previous print. Cost 1. liv.] It could seem that the terms “painting” and “size of canvas” are not suited to the description of “colour prints”; however, Jacques Fabien Gautier d’Agoty was at that time using the technique of colour mezzotint to reproduce paintings, by himself as both of these still lifes described in the advertisement, and by other artists like Salvator Rosa, le Carache, Coypel, de Troye, le Correge, Albert Durer, de la Joüe, Rigault, Lebourdon, Girardow (as quoted in the issue of the Mercure de France). The choice to offer prints as pairs or pendants, as Gautier d’Agoty did here with the two fruit dishes, is a way to appeal to customers who liked paintings. As Kristel Smentek notes: ‘It was conventional in eighteenth-century houses to hang pictures of a similar size, which were often by the same artist, together as pairs. Printed paintings could serve the same purpose.’ (Colorful impressions, p. 11)

A few years earlier, the inventor of the colour mezzotint, Jacob Christophe Le Blon, had used this technique in order to ‘multiply, by way of printing, the paintings and drawings in their natural colouring’, as mentioned in the exclusive privilège (monopoly) which was given to him in February 1718 by George I of Great Britain. Le Blon’s invention was - according to him - based on the Newton disc and research about the spectral decomposition of light. Noting that the three primary colours, blue, yellow and red, when mixed in different proportions, make up all visible natural colours, Le Blon was the first to apply this three-colour method to printmaking, printing an image from three mezzotint plates inked in blue, yellow and red respectively. In this process, each tiny dot plays a part in the reproduction of all the shades of the selected subject’s ‘natural colouring’.

In 1737, Louis XV grants Jacob Christophe Le Blon a privilege to be, with his workshop, the only printer allowed to practice the art “of printing paintings with three plates” (Arrêt du Conseil d’État – decree – dated 12 November 1737, cited by Florian Rodari in Anatomie de la couleur, p. 62). After Le Blon’s death in 1741, Jacques Fabien Gautier d’Agoty, who had been a student of Le Blon for a short time, obtained from the king a new thirty-year privilege, which he put to use immediately by printing Plums in a Fruit Dish the same year.

As Florian Rodari and Corinne Le Bitouzé in particular point out, Gautier d’Agoty soon abandoned the technique of colour mezzotint printed from three plates as invented by Le Blon, because the process was difficult to implement and not very profitable. For each print to be successful, several tricky and costly tasks had to be flawlessly executed : chromatic decomposition of the subject ; engraving each plate with a mezzotint rocker and burnisher ; choosing either opaque or transparent colours, which must be suited both to the desired final effect and to intaglio printmaking ; and finally printing the different plates, which must be done with the utmost care, using the registration marks drilled in each corner of the copperplates, on a well-aligned press.

Plums in a Fruit Dish, printed soon after Gautier d’Agoty received his privilege, still shows just such careful work. The colour mezzotint technique perfectly reflects the sometimes matte, sometimes glossy texture of damascene plums, or damsons, as well as their characteristic colour, a mix of blue and red with sometimes gold accents. The superposition of blue, red and yellow dots, as well as the unequal depth in the dips enables the printer to get all colour shades. However, Gautier d’Agoty also used a fourth plate, printed in a very discreet black, which allowed him to showcase the intensity of the colours while keeping down production costs. On several occasions, he wrote in the Mercure de France to champion the four-colour printing process, which he claimed to have invented, against the strictly three-colour process put forward by Le Blon.

The subject in Plums in a Fruit Dish shares similarities with two still lifes with fruit painted by Chardin around 1728: A Bowl of Plums (Phillips Collection, Washington) and Still Life with Dead Pheasant, dish of plums and basket of pears (Staatliche Kunsthalle, Karlsruhe). Perhaps Gautier d’Agoty drew some inspiration from these two still lifes, since he used colour mezzotint to reproduce other paintings by Chardin, like The Young Student Drawing and The Tapestry Worker, painted around 1738, and about which the May 1745 issue of the Mercure de France pointed out that: “Ces deux tableaux furent remis du vivant de M. de la Roque à l'Auteur des tableaux imprimés pour être gravés en couleurs.” [“These two paintings were handed, while M. de la Roque was still alive, to the Author of the printed pictures so that they might be engraved in colour.”] However, Plums in a Fruit Dish by Gautier d’Agoty has a delicacy and sensitivity distinct from Chardin’s 1728 still lifes, and is closer to Chardin’s Basket of Plums (The Chrysler Museum, Norfolk) painted in 1765, twenty-four years after Gautier d’Agoty’s print.

Impressions of Gautier d’Agoty first colour prints are rare. This is probably due to how complex they were to create. Different impressions of Plums in a Fruit Dish show slight colour and tone variations, like the impression kept in the British Museum, two impressions in the Bibliothèque nationale de France (IFN-10025383 and IFN-10025384), or the one kept in Dijon Municipal Library.

After Plums in a Fruit Dish, Gautier d’Agoty only engraved about ten plates reproducing paintings. From 1746 onwards, he focused on anatomical, zoological and botanical plates. They proved extremely popular and made his name.