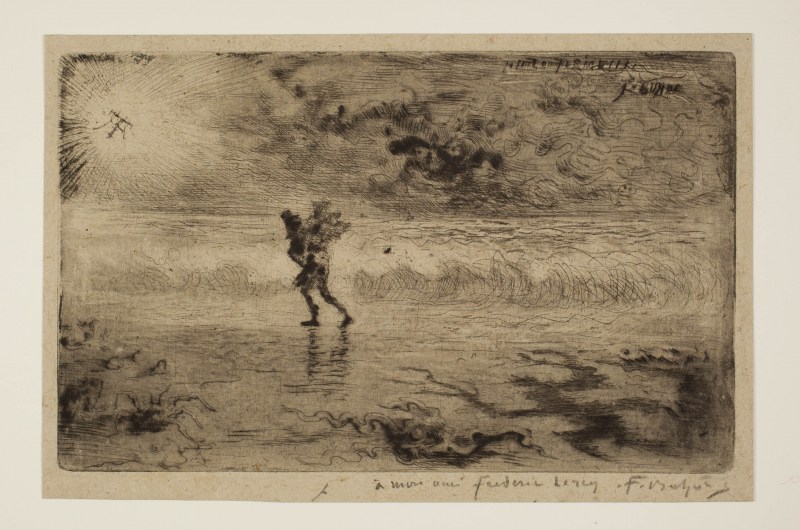 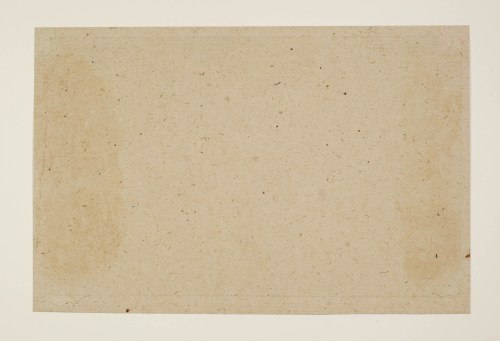 Impression of the first state (of 4) before the long stick under the painter’s arm, before the birds in the sky and before the monogram and other additions.

A tiny inclusion in the paper above the dark cloud  tore off leaving a tiny (3 mm) scratch, which has been retouched in watercolor. Small margins (sheet: 143 x 219 mm).

Impressions of the first state are very rare. Gustave Bourcard mentions an edition of 6 to 8 impressions.

We are aware of another impression of the first state printed on the same paper. In addition, Arsène Bonafous-Murat listed in his Félix Buhot catalogue (2004) an impression printed on « vergé fort gris grumeleux » [heavy nubby gray laid paper]. It seems that Buhot gave preference to this kind of paper when printing impressions of the first state of Le Peintre de Marine, perhaps because the thickness and gray tone of the paper strengthened the heavy atmosphere resulting from the sea storm.

The inscription “LE JOUR DU TERME!!!” [“Rent is due!!!”], hard to decipher in the top right corner, makes it clear that the plate has a sarcastic tone: as much as the marine painter may try to evade paying rent when it is due, his demons will catch up with him even in his favourite haunts, under the appearance of threatening monsters crawling on the shore, or outlined in heavy clouds.