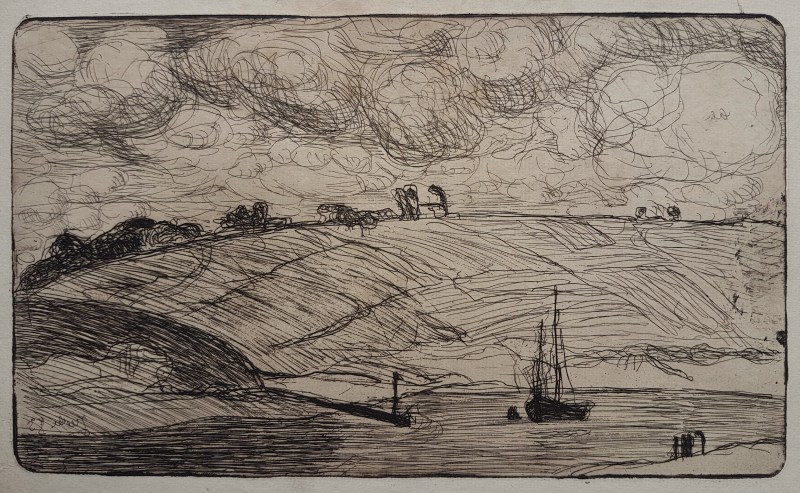 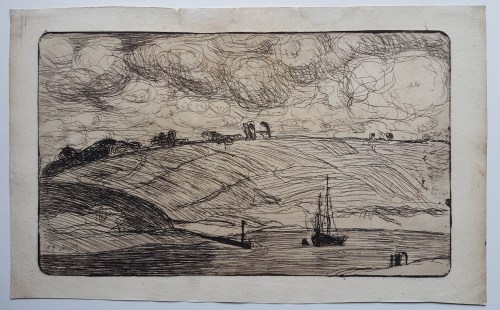 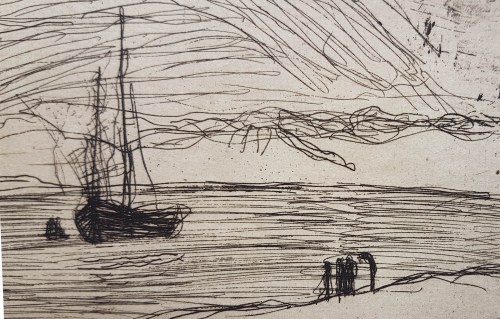 Field, Strauss and Wagstaff assume that this is the print mentioned in the catalogue of Seguin's solo exhibition in Le Barc de Boutteville's gallery in February-March 1895, under the title L’entrée de la rivière (no. 38), with a projected edition of 15 impressions. There is no restrike.

Seguin was impressed by the so-called Volpini exhibition that Gauguin organised in 1889, and which gathered together works by the “Impressionnist and Synthetist group”; he started engraving the following year. He then made several stays in Pont-Aven, in 1891 and 1892, before settling in Saint-Julien close to Le Pouldu in the summer of 1893. There he worked in engraving alongside Roderic O'Conor, as told by Jos Pennec: “They worked in concert on a series of etchings, landscapes of the Pouldu region, trees with fluid and tormented outlines, daily gestures of Breton peasant women. Their style changed and became more marked, landscapes became synthesised into progressively more abstract studies of shapes and planes; each part of the landscape was marked out in the Cloisonnist style, with a succession of vigorous vertical strokes and horizontal bands that highlight the different masses in the composition. Seguin had mastered the technical possibilities of etching to perfection, and was at the height of his artistic powers.” (Jos Pennec, Armand Seguin, 1869-1903, Musée de Pont-Aven, 1989, our translation).

Field, Strauss and Wagstaff mention three impressions of L’Entrée de la rivière, one of which is signed by Seguin “to Monsieur Beltrand”. In 2005, the C. G. Boerner gallery presented in its catalogue an impression that had belonged to Roderic O'Conor. Our impression belonged to Émile Jourdan, who lived in Pont-Aven and regularly met with Gauguin, Seguin and O'Conor. It is known that Seguin sent some of his plates to Paris with instructions to the printmaker Delâtre on how to print them (see Boyle-Turner, p. 82). He probably printed a few impressions himself on a small printing press at Le Pouldu, and then gave them to his friends.