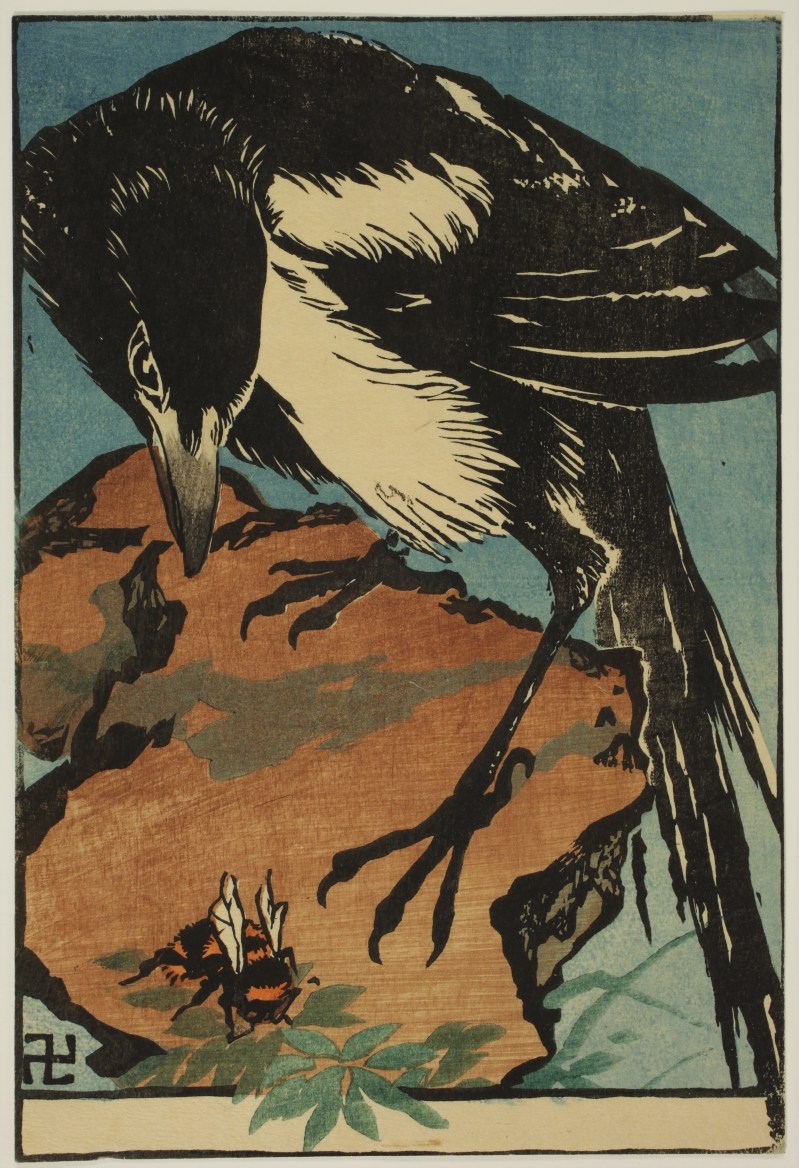 Impression without the plate inscribed Les Amis de l'Art Japonais. Dîner le Mardi 9 Mai 1911 [Friends of the Japanese Art. Dinner on Tuesday the 9th of May 1911].

Jules Chadel, along with Prosper-Alphonse Isaac, is one of the printmakers who created the most invitations for the dinners of the Société des Amis de l'Art Japonais [Society of Friends of Japanese Art]. His first illustration for these invitations is from 1909 and represents chrysanthemums printed in colour on a white background. Magpie and Wasp, created for the dinner that took place on 9 May, 1911, shows how much Chadel developed in two years, under the guidance of Prosper-Alphonse Isaac and of the Japanese printmaker Yoshijirō Urushibara.

Isaac's svastika, printed in the bottom left corner of the subject, is not exactly in the same place as in one of the impressions kept in the Bibliothèque nationale de France. Another impression of Magpie and Wasp does not bear the mark. This means that it is not part of the woodblock, and should not be read as a signature, but as a printer's mark. Philippe Le Stum explains it thus, in the catalogue of the 2015 exhibition dedicated to Chadel: “From 1911 onwards, the division of tasks is more obvious: Isaac would now mark his own works, or those of his peers when he collaborated with them, with a left-facing svastika (or sauvastika), which marks his contribution as a printer in colours mixed with water, according to the Japanese method that he was only one of few artists to have mastered in France. Isaac's printer mark is thus visible on cards created by Chadel between 1911 and 1914.”

The subject and the composition of Magpie and Wasp show the extent of the influence of Japanese prints on Chadel. The predator eyeing its prey is a traditional motif in Japanese art. The composition is also typical: the subject is closely cropped on the bird seen from a low angle, thus excluding any element that is exterior to the scene; this powerfully conjures up the tense magpie, which is slowly swivelling its body, ready to pounce: the eye is guided along the diagonal lines of the legs, body and head of the magpie, whose beak is poised over the wasp as if it had already speared it, like a sword in the skilled hand of a samurai.