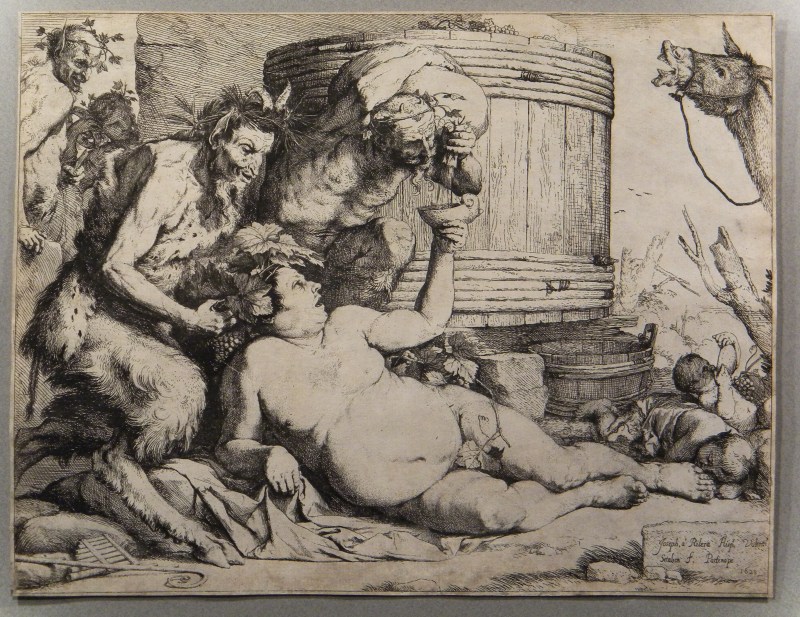 Etching and engraving, 270 x 349 mm to the borderline. Bartsch 3, Brown 14 1st state (of 3) before the dedication by Giovanni Orlandi and before the address of publisher Giovanni Giacomo de' Rossi's were added.

Drunken Silenus (Sileno borracho) is usually regarded as Ribera's greatest etching. It is one of the sixteen etchings he made between 1616 and 1630. He engraved it in 1628 after a painting he had made two years earlier (now at Museo di Capodimonte in Naples). However, it is not identical to the original: the three central figures, Silenus, Pan and the satyr pouring wine, are very similar but in the etching Ribera replaced the young man sitting in front of the donkey in the foreground by two very young fauns lying on the ground. This opens up a vista beyond the vat, where he draw a small landscape.

Our print is one of the extremely scarce copies of the 1st state. The plate was then sold, maybe to Giovanni Orlandi, who added a dedication (2nd state). It was then acquired by the Roman publisher Giovanni Giacomo de’ Rossi, who added his address and the date 1649 (3rd state). The plate is today at the Calcografia Nazionale in Rome.