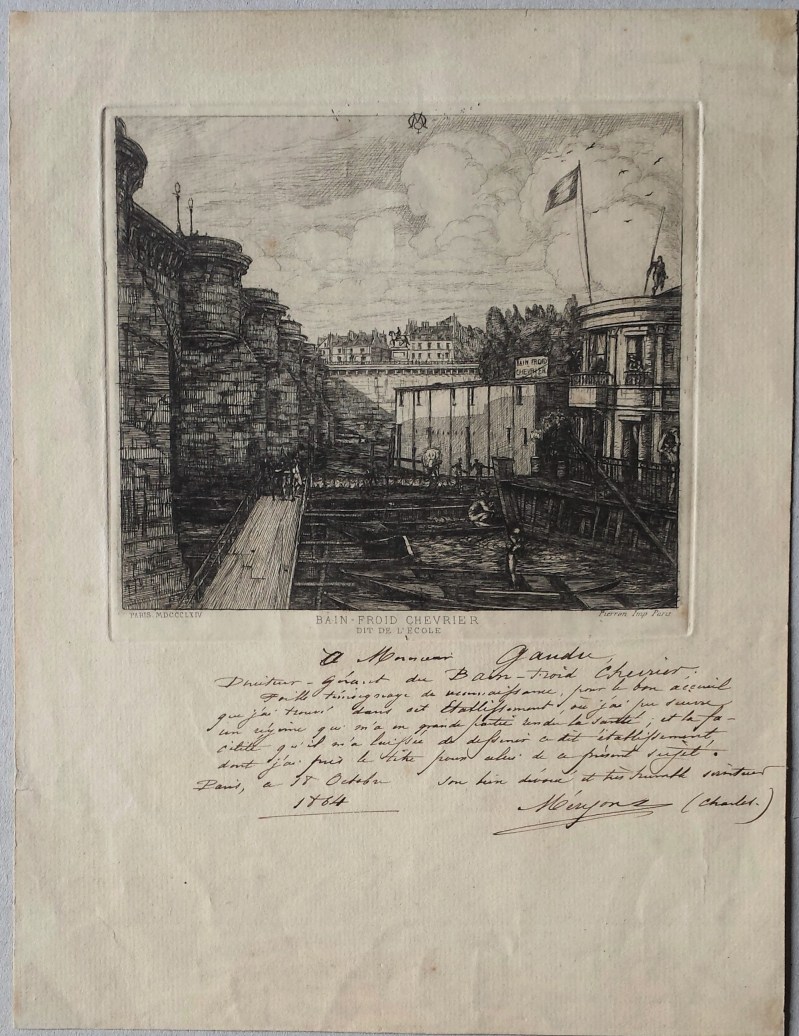 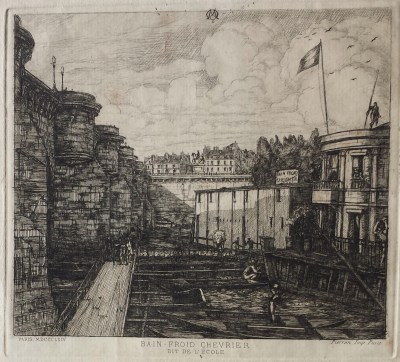 One of the 25 impressions of the final state printed on hudelist watermarked laid paper, besides the edition of 50 impressions printed with a short poem. In good condition. Sheet: 250 x 190 mm.

Under the print, Meryon wrote an important dedication in ink: 'To Mr. Gaudu Managing Director of the Bain-Froid Chevrier; as a feeble token of my gratitude, for the warm welcome I received in this Establishment, where I was able to follow such a regimen which gave me most of my health back; and the help he afforded me to sketch the aforementioned establishment, whose title I gave the present subject. Paris, today 18 October 1864, your most devoted and very humble servant Méryon (Charles).'

“I was known under the name Gentil, and I only took the name Meryon when I became a sailor; that is the name of an English family, and one of its most illustrious members, M. C. L. Meryon, whom for a long time I believed to be my father, but who had only been, I think, my guardian... (…) Moreover, I should think I have rightfully earned this name through my works of art, which all bear the mark of my personality, and I will go as far as to say that the sort of life I lead, and have led, does reasonably justify, it seems to me, its etymology.” (Meryon, Lettre du 29 mai 1865…, pp. 19-20)

While we won't try to guess which exact 'etymology' Meryon had in mind, this letter at any rate does show that he was particular about the spelling of his name.

On 10 October, 1864, Meryon wrote to Henri Le Secq that the etching of the Bain-Froid Chevrier that Le Secq had ordered was ready. Meryon informed him that he had signed the “bon à tirer” for 12 impressions without the letter, and that he would etch the letter the next day to have it printed immediately. He confirmed that he would deliver the plate for the Bain-Froid Chevrier, as he had accepted to do, even though he had reservations, but he asked Le Secq to destroy the plate ‘after a reasonable number of impressions’. On 14 October, Meryon wrote to Le Secq informing him that a print run of 50 impressions with the poem was underway. On 16 October, Meryon signed a “bon à tirer” for an additional 25 impressions without the poem (Schneiderman p. 185). On 18 October, Meryon wrote to Le Secq, describing the 50-print run with the poem printed underneath the image in mine-orange, gold, blue or black, and reminded him that he wanted the plate destroyed. On the same day, he signed several prints for his friends, including one to Monsieur Charles Philippon, Professeur de Mathématiques au Lycée Napoléon. Philippon was also a painter and had studied with David; Meryon took lessons from him (Meryon, Notes particulières...) and made the large etching of the Lycée Napoléon or Collège Henri IV, seen from the sky, for him as well  (Schneiderman 91).

The impression of the Bain-Froid Chevrier presented here is the one that Meryon addresses on the same day, 18 October 1864, to 'Monsieur Gaudu, Managing Director of the Bain-Froid Chevrier'. This impression bears a long dedicatory letter in which the artist expresses his gratitude for two reasons. First of all, for the warm welcome he received in the establishment, where the regimen he followed gave him “most of [his] health back”. In his well-documented biography of Meryon, R. Collins notes this improvement: ‘His physical and mental well-being was served by visits to the Chevrier Cold-Water Baths operated by M. Gaudu beside the Pont-Neuf.’ (R. Collins, 1999, ch. IX, p. 196). Let us add that Meryon doesn't say that the cold baths gave him his health back, but only “most of” it. He was committed again to the Charenton asylum two years later, in October 1866.

The second reason for Meryon's gratitude is the 'help' that the director afforded him 'to sketch the aforementioned establishment'. We don't know whether this 'help' simply means that the director granted his authorisation, or whether he provided Meryon with specific facilities or amenities. According to Seymour Haden, Meryon was sometimes prevented from sketching in public by policemen 'who made him move on' (quoted in J. van Breda, p. 185). Maybe the 'help' in question consisted in the director putting in a word for Meryon.

Meryon made several preparatory sketches for the Bain-Froid Chevrier. Delteil mentions two of them (L. Delteil, 1907, no. 44). J. van Breda surmises that Burty bought them from Meryon (van Breda, p. 184), and that they were later bought by Seymour Haden, who exhibited them in London in 1879 (Burlington Fine Arts Club, no. 122, p. 44) before taking them to the United States; they were exhibited in New York in 1898 (Catalogue of the Grolier Club, 1898, no. 123, p. 54). In his article on the genesis of the Bain-Froid Chevrier etching, Jacobus van Breda mentions a ‘recently rediscovered detail study’ (van Breda, pp. 184-185).

Two letters by Meryon, mentioned by Delteil in his catalogue raisonné, give us an interesting insight into the way Meryon worked: he preferred to give precedence to his own vision of the landscape, rather than actual reality. On 13 July 1864, Meryon informed Le Secq that he had “completed a good part” of the drawing; but then two weeks later he wrote again to explain that he had to redo it: ‘…I have made another drawing, for a better position, of a portion of the subject which did not altogether please me in my first sketch of it as I had made it too literal.’ (Schneiderman, p. 184). On 10 October, in the same latter informing Le Secq that he had finished the etching of the copperplate, Meryon added up the time he had spent working on the picture so far, and reminded him he had had to start over: ‘I first made a drawing of the scene as it is in reality, but finding that the Pont-Neuf was in too much profile, I made a second sketch in order to have something more accomplished.  He also confided that he had used ‘special methods’ (« un procédé tout particulier ») in order to compose his image: ‘Other details I will reserve until I can communicate them to you personally as they bear upon the special methods I have employed in making the etching.’ (Schneiderman, p. 185). J. van Breda wonders about these ‘special methods’ and quotes Seymour Haden, who explains that Meryon ‘seldom made a complete drawing on the spot’ but that he would draw ‘studies of the various portions’ from which he would compose his subject (J. van Breda, p. 185). In his article on L’œuvre de Charles Méryon published in the Gazette des Beaux-Arts, Burty explained that Meryon had deliberately enlarged the towers of Notre-Dame and the buildings on the quays in Le Petit Pont (Schneiderman 20) by 'sewing' together (his words) sketches made in two different spots, at different levels: one on the riverside, by the water, and the other higher up, standing on the quay (Ph. Burty, 1863).

The copperplate for the Bain-Froid Chevrier wasn't destroyed. It is kept in the Bibliothèque nationale de France.