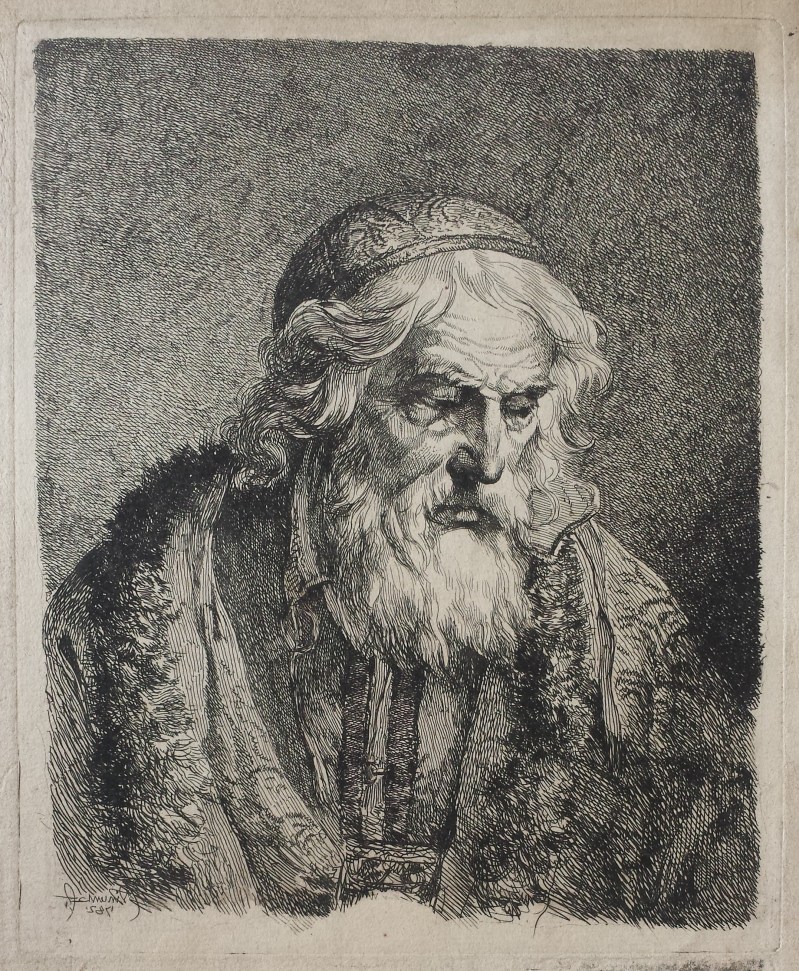 Baudicour insists on the rarity of this etching.

Another impression of this Buste de vieillard, which belongs to the Canadian Museum of Fine Arts, has the number 16 in the margin, in the same handwriting as the number 9 on our impression. We surmise that these two sheets were part of the same print run and were numbered at the same time.

This Buste de vieillard is Vincent's etched interpretation in reverse of his painting in the collection of the Staatsgalerie at Johannisburg Castle in Aschaffenburg (Germany). This painting had previously been attributed to Christian Wilhelm Ernst Dietrich, known as Dietricy, even though there is an inscription with the name Vincent on the back. Pierre Rosenberg has attributed the painting to Vincent, and so did Jean-Pierre Cuzin in his catalogue raisonné of Vincent’s œuvre, published in 2013.

J.-P. Cuzin deems however the title given by Prosper de Baudicour, Le Prêtre grec, to be far-fetched, and reminds us that an impression belonging to the collection of Count Rigal was sold in Paris on December 10th, 1817, with the title Vieillard à barbe, vu à mi-corps [Old Man With a Beard: Head and Torso]. J.-P. Cuzin thinks the print is a likeness of Salomon ben Israël, a man who regularly sat as a model for artists; he appears for instance in the Portrait d'un rabbin [Portrait of a Rabbi], an enamel miniature by Pierre Adolphe Hall in the collection of the department of Graphic Arts in the Louvre (RF 30892). According to J.-P. Cuzin, it is possible to trace an influence back to « both the old men's head of Bolognese painters and those of Rembrandt's followers ». He emphasizes also the care taken by Vincent in rendering this portrait as a print, a “beautiful and powerful etching”.

The Buste de vieillard and Le Christ et le paralytique [Christ Healing The Paralytic] are the only two known prints by Vincent; they are of the same size and both date from 1782. The second one however remained a study, as can be deduced from the two small burlesque portraits etched in the corners, and the fact that Vincent didn't sign the plate.