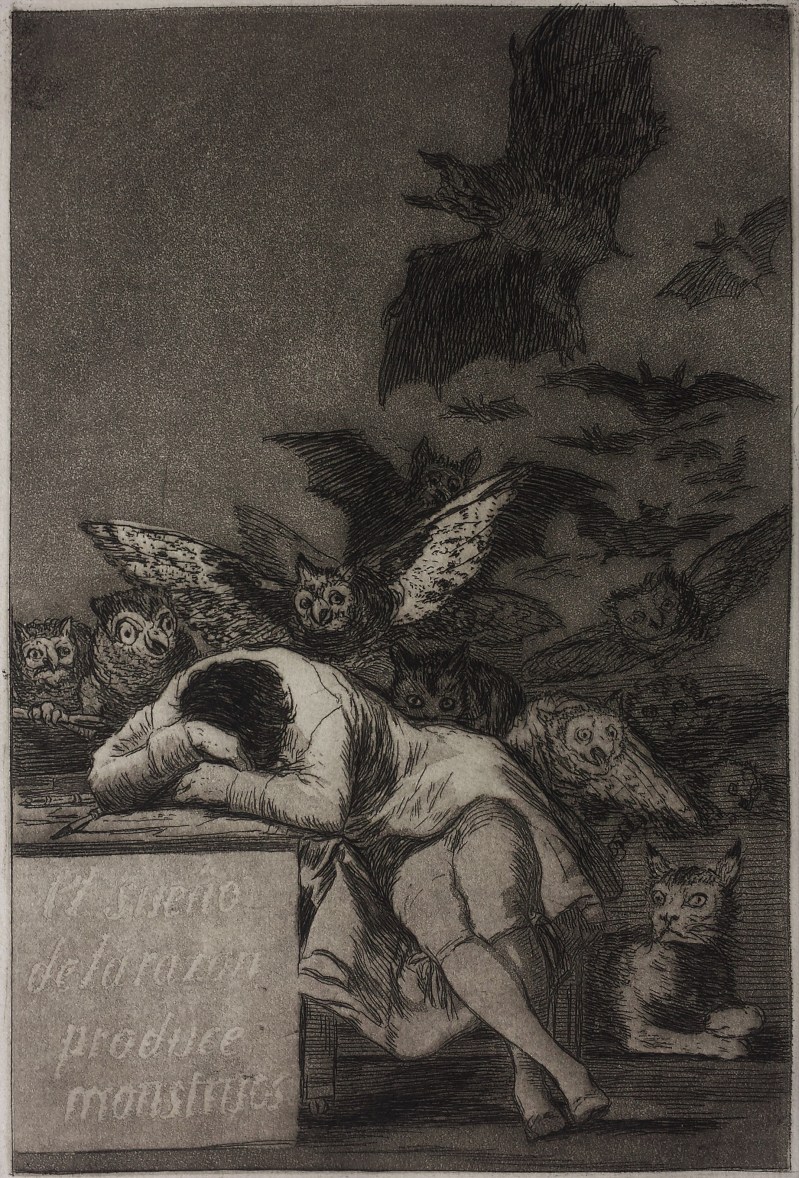 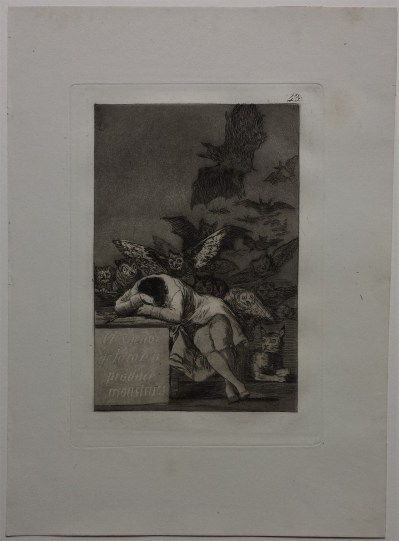 Very fine impression printed on white wove paper, the title of the plate yet clearly legible.

Pale yellowing of the paper in the margins, very slight trace of a second platemark bottom in the blank part. A very little weakening along the left platemark. In very good condition. Sheet: 310 x 227 mm.

The first edition of the Caprices, of which approximately 300 copies were printed on laid paper in 1799, is the only edition printed while Goya was still alive. In his catalogue raisonné of Goya's engraved œuvre, Tomás Harris lists eleven posthumous editions, five of which were printed in the 19th century by the Calcografia in Madrid. The second (1855) and the third (1868) editions were both printed on cream or white wove paper, and only a few copies were made ; they differ in the size of the sheets that were used : 320 × 215 mm (2nd edition), 310 × 230 mm (3rd edition). The size of our sheet is that of the 3rd edition, which was printed before the copperplates were bevelled (for the fourth edition ten years later).

Printing after printing, the plates showed signs of wear and the contrasts that were achieved thanks to the shading in the aquatint subsequently faded. The impressions from the second and third editions of the Sleep of Reason are still rather good, as noted by Harris (“the plate in fair condition”), which is not the case for later impressions (“the plate in poor condition”), in which the aquatint has become so worn that the title is illegible.

The Sleep of Reason is the most famous plate in the Caprices series. It stands out in this series : Goya had first wanted to use it as a title page.

A preparatory drawing in the collection of the Prado in Madrid has the title Sueno 1° [Dream n°1]. Goya added a title in pencil, Ydioma univer / sal Dibujado/ y grabado p.r / Fran.co de Goya/ año 1797 [Language univer / sal Drawn / and engraved by / Francisco de Goya / in the year 1797], as well as indications on how to interpret the Caprices : El Autor Soñando. / Su yntento solo es desterrar bulgaridades perjudiciales, y perpetuar con esta obra de caprichos el testimonio solido de la verdad. [The author, asleep. / His only aim is to drive away harmful superstitions and to perpetuate, through this volume of caprices, the firm testimonial of truth].

In another sketch, also in the Prado Museum, two self-portraits of Goya are among the visions swarming around the sleeper : they encourage the interpretation in which the “sleeping author” would be Goya himself. An inscription attributed to Goya figures opposite the etching in the Manuscript at the Prado Museum and explains how imagination and reason play complementary parts in creation: “La fantasía abandonada de la razón produce monstruos imposibles: unida con ella es madre de las artes y origen de las maravillas” [Imagination without reason produces impossible monsters : united with reason, imagination is the mother of the arts and the origin of marvels].

In the end, Goya decided to make this the first plate of the second part of the Caprices. According to Tomás Harris, the Caprices are thus divided into two parts : the first one, comprised of all the etchings before the Sleep of Reason, is a satire of Man's madness and cruelty in the society of Goya's time. The second part, beginning with plate 43, is more specifically a depiction of the Dreams, that is, diabolical and fantastical visions, the goal of which is to “drive away harmful superstitions.”