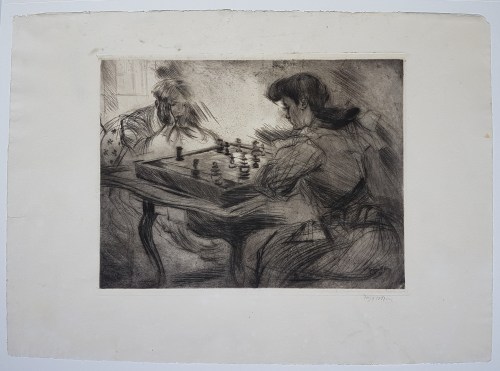 [The Game of chess]

State proof only with drypoint, with the signature and date added. A few strokes erased, the girl’s dress made narrower at the height of the waist. Before the aquatint.

Ginestet and Pouillon list "11 impressions with aquatint, two of which done in colours and one on Japan paper." They also mention that "one impression of the drypoint before aquatint, in olive green, has been described by Goldschmidt; another impression of the drypoint before aquatint, in black, with some reworks, is in the Museum of Modern Art." However, the print in the Museum of Modern Art bears no date or signature: it was in fact made before the aquatint. As for the "reworks", these are strokes placed at the height of the belt on the dress which have been in fact later erased by Villon.

This impression of the drypoint before aquatint is an intermediary state between the impression at the MoMA and the print run of 11 impressions with aquatint: Villon signed and dated the plate, and he made the girl's dress narrower by erasing some of the strokes. For this impression, he inked the plate so that there would be a stark contrast between the light coming from the window and partly illuminating the background, and the shadow in which the room, the chessplayers and the chessboard find themselves, while only the chesspieces and squares are lit, focusing the attention of the two players. The contrast between light and shadow expresses the opposition between the deep focus of the players and the intensity of the game. In the next state on the contrary, the whole room is bathed in light falling on the chessboard, and on the young boy's torso and face; two shapeless black shadows seem to float next to the two players, suggesting the tension of the game.

La Partie d'échecs, engraved in 1904, represents a young Marcel Duchamp, at seventeen, with his then fifteen-year-old sister, Suzanne. Marcel Duchamp had just left Rouen in October, to join in Paris his brother Gaston (who had taken the name Jacques Villon). This drypoint is one of the first testimonies we have of Marcel Duchamp's passion for chess.

Three years later, Duchamp would himself paint three pictures on the same theme: La Partie d'échecs [The Game of Chess], 1910, Les Joueurs d'échecs [Chess players], 1911, and Portrait de joueurs d'échecs [Portrait of Chess Players], 1912. Villon would also go on to make another Cubist etching in 1920 on the theme of chess: L'Échiquier [The Chessboard].

Chess wasn't just a hobby for Marcel Duchamp; he regularly competed in tournaments before the Second World War. In one scene from René Clair's movie, Entr'acte (with a script by Picabia, score by Erik Satie), he can be seen in 1924 playing chess with Man Ray. Photographs of Duchamp after the war often show him in front of a chessboard.

Duchamp tried several times to explain his interest for chess, by drawing a parallel between the game and his aesthetic preoccupations:

"… I found similarities between painting and chess. In reality, when you play a game of chess, it is as if you were sketching something, or as if you were building the mechanism by which you will win or lose. The competitive side of the game is of no importance, but the game itself is very, very plastic and this is probably what drawn me to it."  (James Johnson Sweeney, « Entretien Marcel Duchamp – James Johnson Sweeney », 1955, in Duchamp du signe, Flammarion, 1975, p. 183 – translated from French by us).

Jacques Villon's print, showing a young Marcel Duchamp concentrating on the game, is proof of the budding passion.