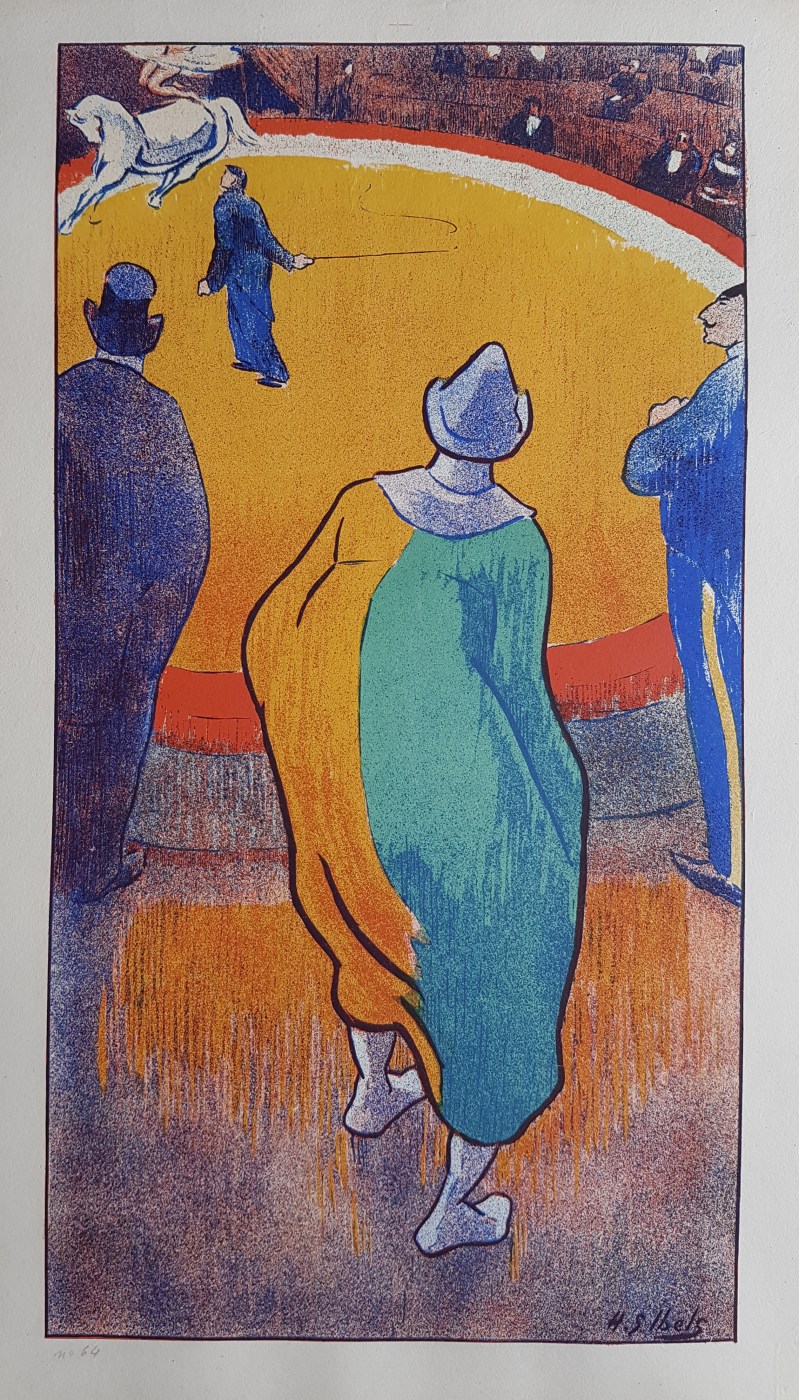 Henri-Gabriel Ibels is one of the founding members of the Nabi group of artists. From 1891 to 1899, he contributed to several journals and newspapers in which he published captioned sketches representing typical characters. He also drew posters, theatre programmes, music sheet covers and numerous lithographs on the theme of concerts and performances: at the theatre, the music hall, the circus. In the journal La Plume for 15th January 1893, the critic Charles Saunier notes, regarding a series of lithographs representing Pierrot and Colombina:

"The characters and their elegant gestures are delineated with a unique line (…) M. Ibels is constantly preoccupied with making a good use of the resources offered by the processes he uses." (quoted in A-M. Sauvage's « Henri-Gabriel Ibels », Nouvelles de l’Estampe, no. 129, p. 28).

In the same year the first album of L'Estampe originale was published, with a cover by Toulouse-Lautrec. The album contained the lithograph Au cirque, le clown, as well as Bonnard's La Petite blanchisseuse [The Little Laundry Girl], Ranson's Tigre dans les jungles [Tiger in the Jungle] and Roussel's L'Éducation du chien [Training the Dog]. In 1893, L'Estampe originale published again Le Café concert [The Music Hall], a series of 22 lithographs by Ibels and Toulouse-Lautrec.

The lithograph Au cirque, le clown is a masterful synthesis of Ibels' pictorial and social preoccupations. The high-angle perspective, the clown's shapeless, two-colour costume, taking up most of the foreground, the contrasting bright colours, the synthetism, make this one of the Nabi period's most modern works.

The framing and the arrangement of the picture play a crucial part here. Ibels placed the horse and the circus-rider (only the lower half of her body is visible) at the tip of the arc formed by the ring banks in the upper left corner; the right side of the ring, which the horse and rider have just left, is deliberately empty.

In this way Ibels not only recreates movement but he also invites us to complete the scene by imagining what the circus audience might have seen; thus we find ourselves in « sympathy » with the clown leaning on one hip: we share his interest and his worried attention. This unusual composition accentuated by the stark contrast between the colours is not only formal audacity on Ibels' part: his aesthetic search is here at the service of his humanist sensitivity, the same sensitivity that is to be found in the less ambitious drawings published regularly by the "journalist Nabi".