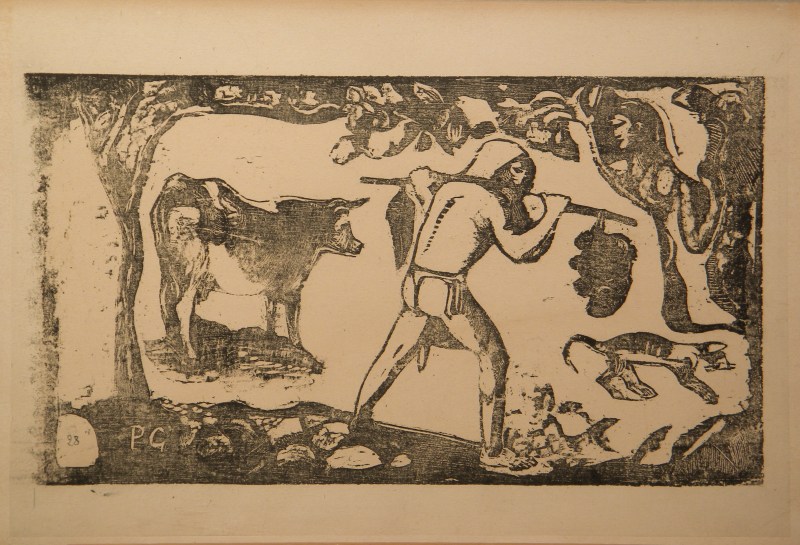 The catalogue raisonné of Gauguin's prints (Kornfeld, 1988) mentions only one impression of the 1st state (Art Institute of Chicago) and 21 impressions of the 2nd state (the last one numbered 31) from an edition of no more than 40 impressions. We can add the impression numbered 22 (sold at auction, Audap-Picard-Solanet & Associés, 25/09/1997, lot number 67). To our knowledge, 14 impressions are currently in European or American collections.

Le Porteur de feï belongs to a series of 14 woodcuts, known as the Vollard Suite, created by Gauguin in 1898-1899 during his second and final stay in Tahiti. In December 1899, he wrote to his friend Daniel de Monfreid that he had completed fifteen plates (Lettres de Gauguin à Daniel de Monfreid, 1950, no. LIX, 151).

In January 1900, he wrote to his art-dealer Ambroise Vollard that he was about to send him: “next month, thanks to someone leaving for France about 475 impressions from woodblocks.” He added: “25 or 30 numbered impressions have been made from each block and the blocks then destroyed.” (Lettres de Gauguin à sa femme et ses amis, 1946, Letter no. CLXXIII, p. 301, our translation). Monfreid received the parcel and gave it to Vollard, who deemed the prints worthless. Carved with a knife into an irregular woodblock, unevenly inked and rudimentarily hand printed, the woodcuts had a rough and clumsy appearance. But it was what Gauguin was looking for. In December 1899, he wrote to Monfreid: “Carved onto ordinary boards, with an increasingly poor eyesight, these prints surely stand out from the common dirty craft and are really imperfect, but I think they are interesting Art.” (Lettres de Gauguin à Daniel de Monfreid, 1950, no. LIX, 151, our translation). In another letter, dated August 1901, he found similitaries between his prints and medieval woodcuts: “It is precisely because that woodcut goes back to the primitive time of wood engraving that it is interesting.” And he added: “I am sure that sooner or later my wood engravings, so different from all the prints being done, will be valuable.” (op.cit, LXXV, our translation). In the same letter, Gauguin asked Monfreid to take the prints back from Vollard and suggested that Monfreid have some framed “one by one or two by two” and then exhibited in his home: should someone like one, Monfreid could sell it to them. In June1902, Monfreid wrote to Gauguin that he had got the prints back from Vollard and had exhibited them in May in the Béziers Salon, where only four had been sold (Georges Daniel de Monfreid, Sur Paul Gauguin followed by Lettres à Paul Gauguin, 2003). Monfreid then sold some more prints and after Gauguin's death he gave some to various people.

In 1910, the Slovak astronomer Milan Štefánik discovered eleven woodblocks in Tahiti in the fence of a courtyard and took them to France. Three of them were original blocks for the Suite Vollard: Soyez amoureuses, vous serez heureuses; Femmes, animaux et feuillage; Te arii vahine. In 1911, Štefánik had them printed by the Czech etcher František Šimon and then tried to sell the blocks to dealers or museums, without success. Restrikes were made in Prague in 1930 and 1961. The eleven blocks are now in the National Gallery, Prague. Two other plates for the Suite Vollard were printed before 1918 by E. Druet: Le Calvaire breton, L’Enlèvement d’Europe. Pola Gauguin, Paul Gauguin's son, bought the two blocks and had them printed again. The woodblock for Le Calvaire breton is now in the Bibliothèque nationale de France, the one for L'Enlèvement d'Europe is in the Museum of Fine Arts, Boston. The plate for Te Atua was restriked (about 100 impressions) in 1995 by the Paul Gauguin Museum, Tahiti.

The woodblock for Le Porteur de feï was never found. There is therefore no posthumous edition. Only a poor reproduction from the impression annotated PG3 was edited in the USA in 1943.