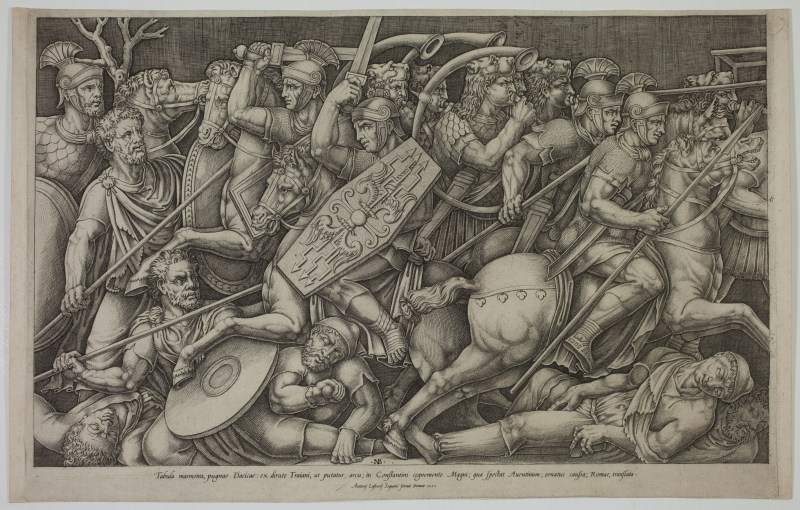 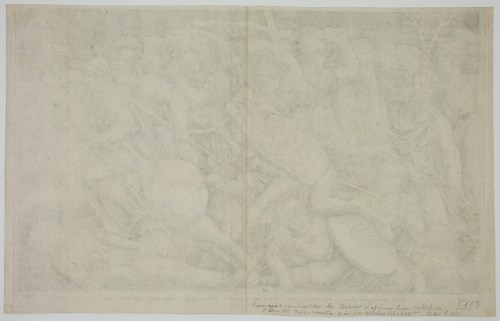 Robert-Dumesnil describes a first state in which only the outlines of the thunderbolt on the hexagonal shield are engraved and the background left white. Silvia Bianchi mentions Robert-Dumesnil’s description. Bartsch only mentions one state.

Roman Soldiers fighting the Dacians reproduces a fragment from a bas-relief frieze on one of the small sides of the attic of the Arch of Constantine in Rome. The panel is a spolium from a monument previously erected to celebrate Trajan’s Dacian Wars. At the bottom of the engraving, the letter explains the subject: Tabula marmorea, pugnae Dacicae : ex diruto Traiani, ut putatur, arcu ; in Constantini cognomento Magni ; qua spectat Auentinum ; ornatus caussa ; Romae, translata. / Antonij Lafrerij Sequani formis Romae 1553: Marble panel [representing] the battle in Dacia: thought to come from Trajan’s arch, now destroyed; in the name of Constantine the Great; [on the side] looking towards the Aventine Hill; because of its beauty; transported to Rome. / From the presses of Antoine Lafreri of Sequania, in Rome 1553 (our translation).

From 1547 to 1560, Nicolas Beatrizet produced engravings in Rome for the printer and print dealer Antonio Lafreri (c. 1512-1577). The study of Classical Antiquity was gaining ground at the time and engravings were a great means of reproducing and distributing images of Classical ruins in large numbers. Competition was fierce between Roman publishers who often had the same subjects engraved, sometimes by the same engravers. However, the representation of reliefs requires great technical mastery in engraving and forces the artist to make certain choices. Michael Bury wrote an article specifically about the study of the various choices that Beatrizet had to make in his engravings, to highlight in what way those choices were different from the choices made by other contemporary engravers. Regarding Roman Soldiers fighting the Dacians in particular, Bury notes that Beatrizet remains more faithful to the original sculpture than Marcantonio Raimondi or Marco Dente, who also engraved representations of fragments of the relief. Contrary to Raimondi and Dente, Beatrizet does not add elements to the original design, unless to represent a missing broken hand or weapon. He also preserves the appearance of stone by leaving the eyes of the soldiers blank. On the other hand, he stretches the background to the top of the engraving and eliminates some details from the bas-relief, like the banners on the right, so as to make the scene more easily legible. The result is a happy compromise between aesthetic concerns and the documentary purpose of the work.