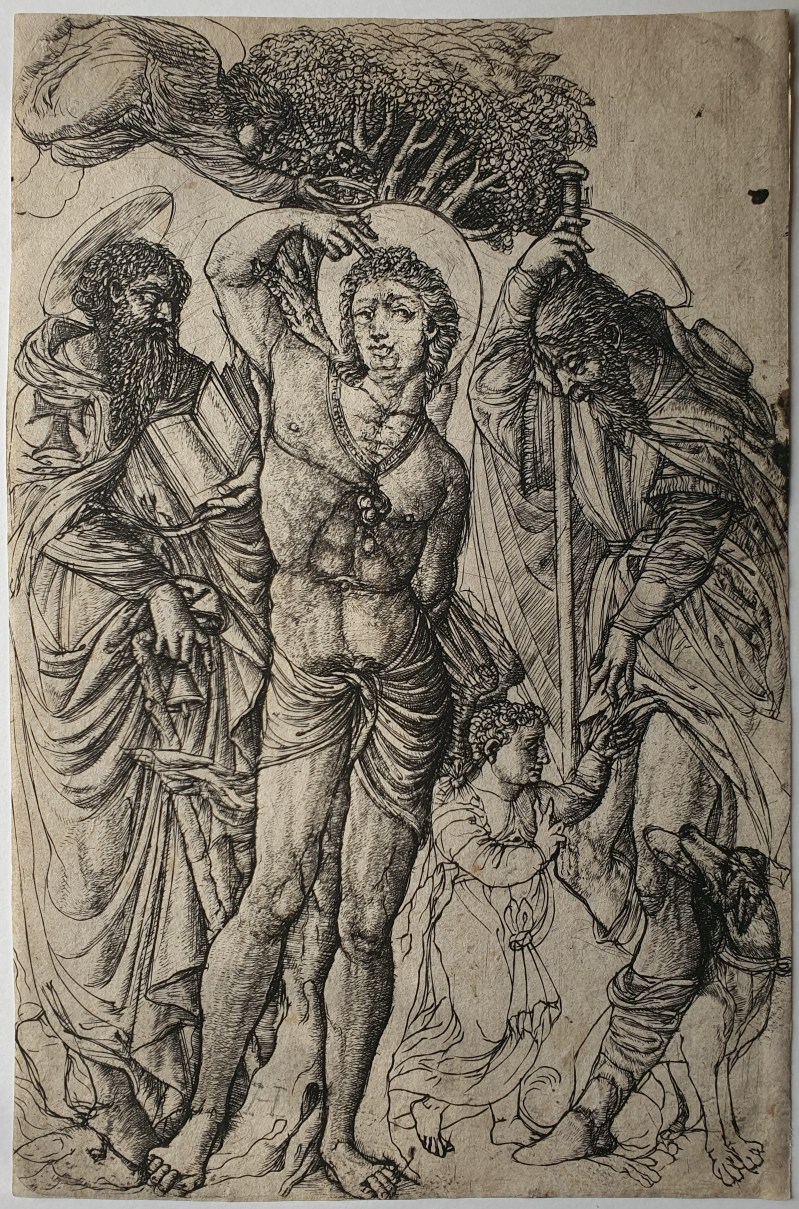 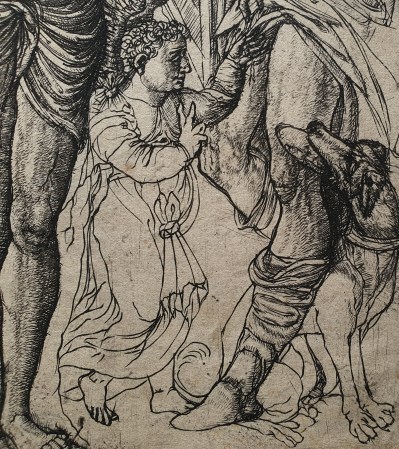 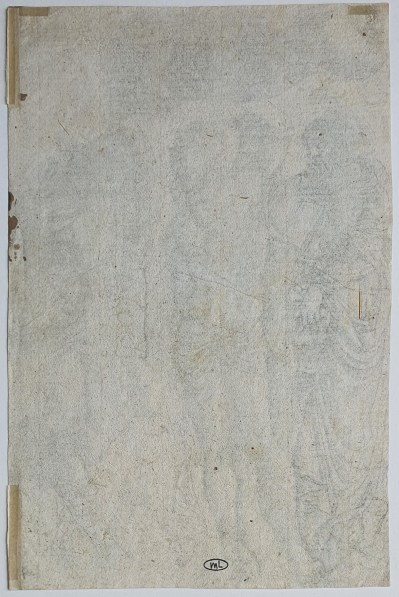 Colin Eisler notes that « all impressions are covered with very fine scratch-like lines. » The lines are clearly visible on our impression. The very slight strokes which render the texture of the flesh and clothes are also well printed.

Three tiny ink stains on the right edge and a letter H written in pencil between the feet of St Sebastian; otherwise in excellent condition.

Provenance: collection Marcel Lecomte, his mark on the back (Lugt 5684).

“Jean Duvet is considered to be the first engraver of the French Renaissance, and certainly one of the most enigmatic figures of the French 16th century” (Catherine Chédeau, p. 207, our translation). Many questions still remain when it comes to his engravings. The date of Saints Sebastian, Anthony and Roch is still debated. It is generally considered to have been created later in the artist’s life: “The print is typical of the artist’s Spätstil, its extremely rich, expressionistic quality achieved by a strange fusion of a coarse, rapid line contrasted with a dense, dramatic chiaroscuro.” (Eisler, p. 312). It might seem as if the plate has been left unfinished: some areas are only roughly sketched, others are empty, whereas in most of Duvet’s prints, the engraving fills all the space available. Has this work deliberately been left incomplete?  Catherine Chédeau remarks that “the engraving being seemingly unfinished doesn’t seem to have deterred [the public], since some [of these unfinished prints] are known by several impressions”. She raises the question: “Is this non-finito an aesthetic choice?” “One of the paradoxes of Duvet’s engraved œuvre” is definitely, according to her, “its twin attraction for both non-finito and horror vacui.” (Langres à la Renaissance, p. 231, our translation)

That Duvet abhors a vacuum is plain to see in this Saint Sebastian: the different parts of the engraving seem pulled together tightly. Saint Anthony on the left, Saint Sebastian in the center and the group gathered around Saint Roch with the angel and the dog to the right, and finally the angel crowning Saint Sebastian and the landscape that dominates the scene: all these elements are tightly interlinked, so that their balance rests, not on the rules of perspective, but on the way they fit together. Paulette Choné reflects on Duvet’s style that “he disregards the horizon and the slow flight of lines in the distance”: “vertical stacking”, “the way elements pile up, leaving no gap, create in Duvet’s works a very personal ostinato, a world entirely his own, made up of thick forests, vaguely antique buildings, spaces of unquiet, [etc.]” This strong distaste for emptiness is also reflected in his “love of relief” and the care he takes to imitate different textures, “fur, grass, leaves, feathers, scales, muscular nudes, the tight lumpy clouds…” (Langres à la Renaissance, p. 265, our translation).

On the other hand, his attraction for things left unfinished, for non-finito, can be seen in other engravings by Duvet, and particularly in three engravings with similar dimensions (248 x 165 mm on average): The Lamentation (Eisler 71), The Despair and Suicide of Judas (Eisler 72) and Moses and Saint Peter (Eisler 73). Nicolas Boffy is of the opinion that these four prints could make up “a series, the meaning and logic of which still remain to be discovered” (Langres à la Renaissance, p. 260, our translation). He suggests that all four “express the same idea: protecting oneself against the dangers of “an evil death” by cultivating compassion for the suffering of the Saviour, faith in Christ, and the intercession of saints.” Colin Eisler indeed points out an hypothesis: that Saints Sebastian, Anthony and Roch, “depicting three saints venerated for their healing powers, is one of the few known French examples of a Pestblatt”, these pious images thought to protect the bearer against the endemic plague. Another print by Duvet, The Martyrdom of Saint Sebastian (Eisler 4), could belong to the same theme.

Duvet’s Italian influences are particularly visible in this print. Arthur E. Popham remarks that the figure of Saint Sebastian closely resembles one of the young men in Andrea Mantegna’s Bacchanal with a Wine Vat. The composition of Duvet’s engraving might have been inspired by The Risen Christ between Saint Andrew and Saint Longinus, also by Mantegna.