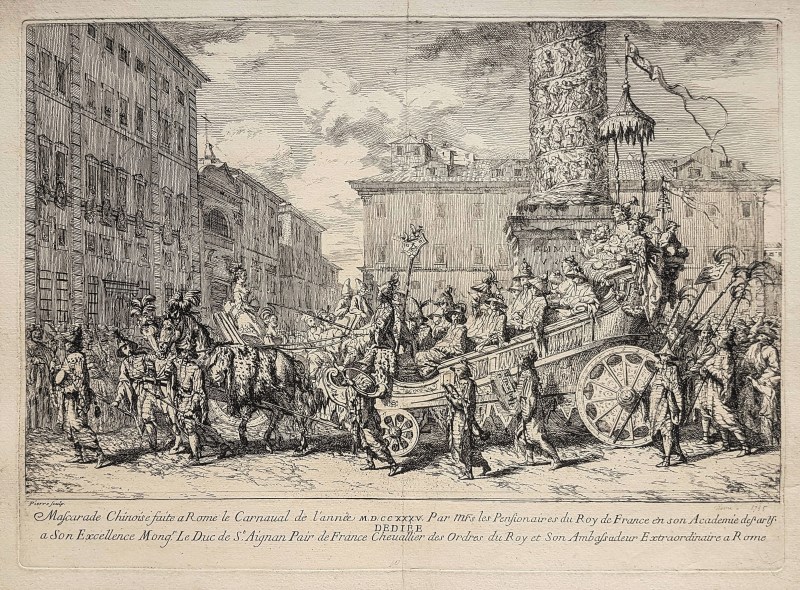 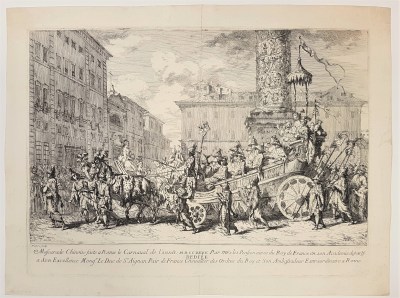 Rare and superb impression, with very rich contrasts. This impression was printed before the some scratches were burnished, in particular those on the building in the backgound: on the left pilaster and on the right window. The white areas resulting from this burnishing are visible on the later impressions, e.g. on the impression in the National Gallery of Art.

The Chinese Masquerade engraving is Jean-Baptiste Marie Pierre’s masterpiece. In 1734, at 20 years old, he wins the Prix de Rome for painting (the famous first prize of the French Academy of Fine Arts in Rome) and is invited to spend some time at the French Academy in Rome, as a ‘pensioner of the King’, between 1735 and 1740. His engraving reflects the exuberant enthusiasm of the young French artists, on display for the Romans, who are themselves wearing costumes for the Carnival. “The float on which the French pensioners are sitting is seen here going past the Antonine column, the Piazza Colona, almost opposite Palazzo Mancini, the seat of the French Academy in Rome.” (Lesur and Aaron, p. 478, our translation). The engraving is dedicated to the duc de Saint-Aignan, the French ambassador in Rome.