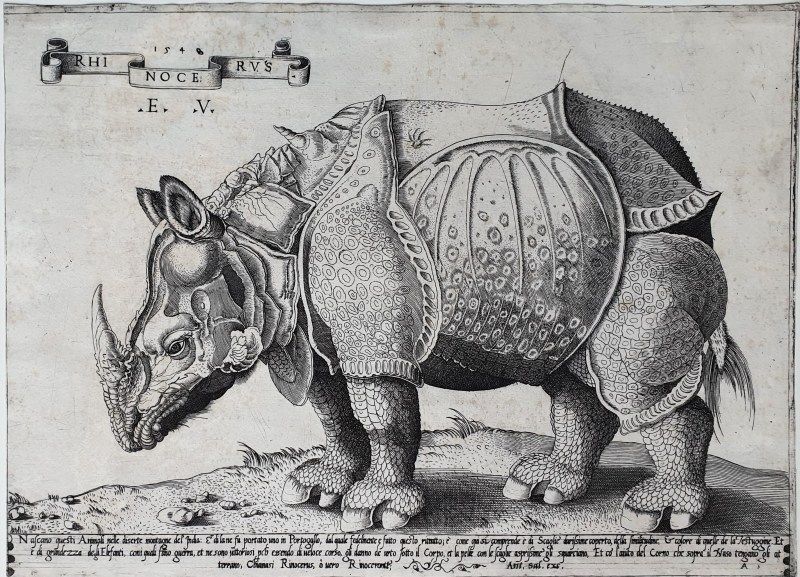 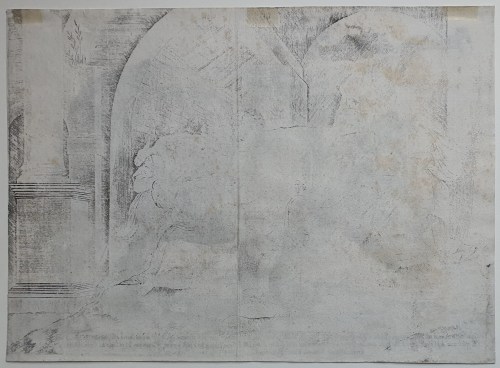 Very scarce impressions of Vico’s Rhinocerus printed by Salamanca are dated 1542. One is in the collections of the Rijksmuseum, Amsterdam (RP-P-1903-A-23317). Adam Bartsch wasn’t aware of this earlier state and only describes an impression dated 1548. Neither is this state mentioned in The Illustrated Bartsch (volume 30, Enea Vico, published in 1985).  A worn-out impression, at the UCL Art Museum of London has a corrected date 1558. On this impression, Salamanca’s address has been replaced with the address of the printmaker and publisher Giacomo Lauro (ca. 1561 - 1645/1650), who was active in Rome from 1583: Iacobus Laurus excudit Romae.

Superb impression printed on laid watermarked paper; according to Briquet, many varieties of the watermark, two crossed arrows, are known on Italian papers dating from the 15th and the 16th centuries.

Part of the maculature of an impression of The Nativity by Agostino Veneziano, who was active between 1509 and 1536), is visible on the back of the sheet. Bartsch lists this print as « very rare » (volume 14, no. 17). On early impressions of this print, which dates from 1531, there is no publisher address. Adam Bartsch quotes impressions printed from the worn-out plate with Antonio Salamanca’s address. Such impressions could match the date of the printing of our impression of Vico’s engraving, circa 1548.

In 1542, Enea Vico, who is 19 at the time, is working in Rome for several clients, among which printmakers Tommaso Barlacchi and Antonio Salamanca. He later leaves for Florence, then Venice in 1546. Like many others at the time, he works mostly on interpretation or reproduction prints, including reproductions of other prints. John Spike notes that “In the year 1542 alone, Vico engraved designs after the Antique, Perino del Vaga, Rosso Fiorentino and Vasari. He also worked after Primaticcio and his compatriot, Parmigianino.” (The Illustrated Bartsch, volume 30, Editor’s note). In the same year, he faithfully reproduces The Virgin Seated on the Clouds, by Raimondi after Raphael (Raimondi: Bartsch 47; Vico: Bartsch 4).

In The Renaissance Print - 1470-1550, David Landau and Peter Parshall note that “At times, the difference is difficult to quantify, but it is symptomatic that copies of engravings were normally made by young printmakers trying to increase their skills by imitating the technical achievements of some more proficient colleague, whereas copies of drawings were made by skilled, experienced printmakers such as Vico, emulating the colore of a painting and normally executed at the request of a publisher.” (Landau and Parshall p. 165). Landau and Parshall specifically mention a 1546 print by Vico after a Michelangelo drawing (Several Children Trying to Put a Stag into a Cooking Pot, Bartsch 48): the work is “not only copying accurately every detail of the model but also trying to convey through the chiaroscuro of the print the tonal values of the drawing. In this case the role of the engraver has become obviously subservient to that of the inventor: the printmaker was no longer borrowing from someone’s else composition in order to recreate, with his own ingegno, a new composition. He was emulating, as closely as his skills allowed him and as passively as his conscience or greed dictated, the work in another medium by a more famous artist.” (Landau and Parshall p. 165).

However faithful Enea Vico remains to the tiniest detail of Albrecht Dürer’s extremely famous 1515 Rhinoceros engraving, his print is not just a reproduction. He wants to prove his ability to translate a masterpiece of wood engraving into a different medium, copper engraving with a burin. His extreme attention to detail does not get in the way of sensitivity, resulting in a picture that shows both his considerable technical mastery and his talent as an artist.

It is notable that Dürer’s name, as the inventor of the image, does not figure on Vico’s print. Similarly, the event that gave occasion to Dürer’s sketch is hardly mentioned. In fact, the caption on Dürer’s sketch, and then on his print, was connected to a current event: in May 1515, a live rhinoceros arrived in Lisbon, the first to reach Europe since Roman times. It was a present from Sultan Muzaffar Shah II to the Governor of Portuguese India, Afonso de Albuquerque; the rhinoceros was sent, alive, to King Manuel I and reached Lisbon on 20 May 1515, causing quite a stir.

The same year, the rhinoceros was sent on as a gift to Pope Leo X; King François I of France was able to see the animal when the ship that transported it made a stopover in Marseille. The animal later drowned when the ship sank. “Dürer never saw the animal himself, and it is assumed that he knew a description in a Portuguese newsletter that was sent to Nuremberg, and that this was accompanied by some sort of sketch that Dürer worked up into his drawing.”  (Dürer and his legacy, p. 285).

Dürer’s print was a great success and exercised lasting influence in the history of art. Enea Vico’s version is the first known copy, and also enjoyed great popularity. Giulio Bodon notes that “the wide spread of the rhinoceros’ image across Italy to the artists and Natural History scientists is truly due to Vico’s engraving, which has frequently been used as a model.” (Bodon p. 51, our translation).