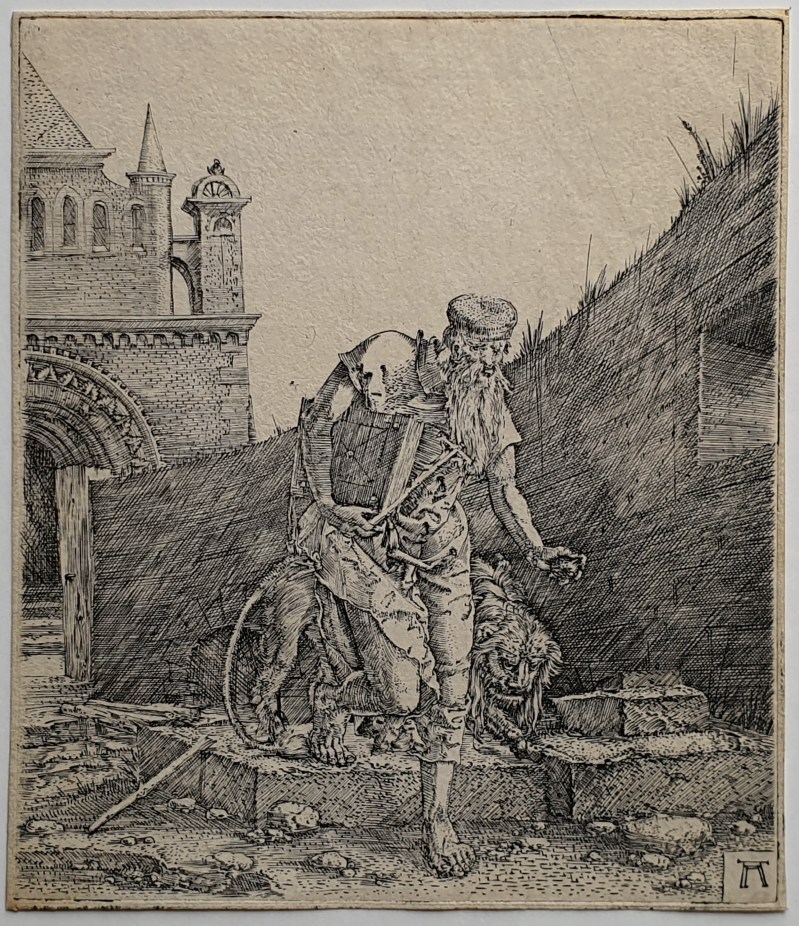 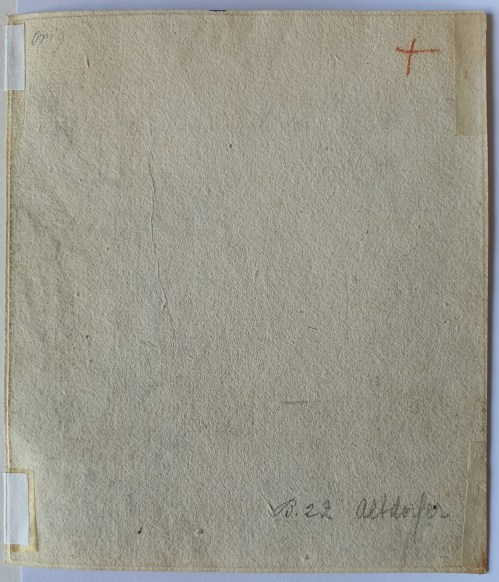 Fine impression printed on laid watermarked paper. Watermark Gothic P with flower (or ‘four-leaf fleuron’) very similar to Briquet 8615 (noticed on a document which dates from 1477-1486). This watermark is part of a group (Briquet 8588 to 8653) which comprises many variants noticed by Briquet on manuscripts or printed documents which date from 1450-1560; he notices that « it seemed impossible to him » to put them into a « useful order ». Franz Winzinger says that Gothic P with flower watermark is a distinctive feature of quality a (of b) impressions of Saint Jerome Walking in a Churchyard ; according to him, these impressions are «deep, showing a sharp transparence » [« Tief, scharf durchsichtig »]; quality b impressions are on the contrary « flat, unevenly printed, mediocre » [« Flau, ungleich gedruckt, mager »]. F. Winzinger didn’t notice any watermark on these quality b impressions. These differences in the quality of the impressions are not mentioned in the New Hollstein volume but Gothic P with flower watermark is also noticed on « early impressions ».

Although it is printed on paper with Gothic P with flower watermark, our impression shows the first signs of the plate’s wear: some light strokes are barely visible or have even faded away, while some shadows are a bit lighter than previously. A few new works, particularly on Saint Jerome’s left arm, which is now shadowed with horizontal strokes, and on his left foot, were probably added in order to strengthen these worn areas. Impressions showing these reworks are in the Museen der Stadt Regensburg (this impression illustrated in Franz Winzinger catalogue raisonné), in Berlin (this impression illustrated in the New Hollstein volume) or at the Metropolitan Museum of Art de New York. We regard these impressions as impressions of a second state, while the impressions kept at the Museum of Fine Arts de Boston and at the British Museum are to be considered as impressions of the 1st state.

Impressions of both 1st and 2nd state of the Saint Jerome Walking in a Churchyard are very rare.

In perfect condition. Thread margins all around the platemark (sheet: 124 x 106 mm).

“Of all Altdorfer’s representations of St. Jerome this one is certainly the most intriguing and least conventional.” (Talbot and Sheestack (dir.) p. 45). Its originality comes mostly from the important role the architectural elements play in the composition. The portal in the background and the wall with a square aperture and a low arch have been compared to those in Dürer's 1510 Christ in Limbo (Meder 121, plate belonging to the Great Passion series). In Altdorfer's engraving however, these architectural elements are more individualised and play a more important part. Franz Winzinger identified the large sculpted Romanesque portal as the portal of the cloister of Saint Emmeran church in Ratisbonn, where Altdorfer lived and where he became an architect in 1526. The long wall of the churchyard, about which Giulia Bartrum observes that Altdorfer “has transformed a mundane architectural element into a remarkably dominant feature of the composition” (Bartrum p. 189), creates a dynamic perspective and emphasises the departure of Saint Jerome and the lion for the desert: the austere wall foreshadows the saint's penance. Giulia Bartrum notices “the emphasis given to the various textures in the wall” (Bartrum p. 189). She also adds that “the treatment of the body and the drapery reveal the influence of north Italian art, such as the figure of Christ in the engraving Descent into Limbo of the late 1460s, attributed to Andrea Mantegna (Hind, v, p. 18, 9)” (Bartrum p. 189), before finally adding “however, Altdorfer’s striding figure is particularly unusual in its frontal viewpoint.” The pose in which Saint Jerome is depicted, bent over, holding a book, a crucifix and a stone for his penance, will later be copied by the young Hans Sebald Beham in 1520 in Saint Jerome Seated by the Arch.