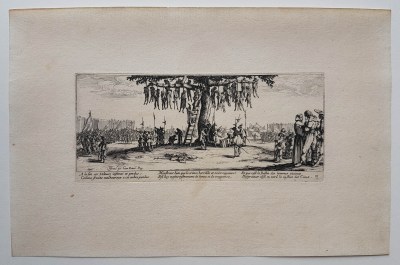 [The Large Miseries of War]

Complete and uniform series of eighteen plates, edition with the verses, numbers and Israël Henriet’s excudit, before the words Callot inv. et fec as a substitution for the excudit. As usual for the early uniform sets, the series comprises plates in the following states: Lieure 1339 (frontispiece) 3rd state (of 3), L. 1340 to 1355 2nd state (of 3), L. 1356 3rd state (of 4). Impressions of the first state, before the verses attributed to Michel de Marolles, are extremely rare (RRRR according to Lieure).

The eighteen copperplates are kept in the Musée Lorrain in Nancy.

Very fine impression with clearly visible backgrounds, which is not the case for many other impressions also bearing Israel Henriet’s excudit, in which the backgrounds appear already worn. Regarding the third plate in the series, La Bataille [The Battle] (L. 1341), Jules Lieure notes that “Only the first impressions have a very clear and distinct background, particularly for the infantry fight, where the ground let the acid seep through in many small places.”(J. Lieure, p. 73, our translation). On our impression, the background is still distinctly visible, with a few drypoint strokes on the lances of foot soldiers.

The series of Grandes Misères de la Guerre is Jacques Callot’s most famous work. It owes its fame to its high number of plates, its technical mastery and its subject matter. It is often considered to be the crowning achievement of a project that started with the series of eleven plates known as the Petites Misères, perhaps engraved in 1632, which remained incomplete and was only published after Callot’s death.

There is very little information on the origins of the second series of the Misères. For instance, it is not known whether a patron commissioned it. The title on the frontispiece, Les MISERES ET LES MAL-HEURS DE LA GUERRE, is confusing: it seems to disapprove of war, whereas careful scrutiny of the plates, their texts and their sequence goes against such simplistic reading. Far from criticising wars or casting doubt on their legitimacy, the Misères actually deal with soldiers’ discipline in wartime: “Callot’s œuvre is calculated to demonstrate how much the discipline of soldiers and respect for occupied or conquered territories should be the constant concern of those whose mission it is to command armies.” (Marie Richard, pp. 5-6, our translation). Regarding this, Paulette Choné noted that art historian Filippo Baldinucci (1625-1697) “who describes each plate praising Callot’s technical mastery and creativity, reminds us that Les Grandes Misères first came to be known under the title La Vita del Soldato. The title of the Misères series in the inventory of the engraver’s estate after his death is, in fact, La Vie des soldats [The Life of Soldiers].” (P. Choné, p. 397, our translation).

The sequence of plates in the series casts light on Callot’s approach. “The engraved scenes are ordered according to rigorous logic which is required in any educational purpose.” (M. Richard, p. 72, our translation).

After the title plate, the series opens with the soldier enlisting, and this first maxim: Il faut que sa vertu s’arme contre le vice [He needs to arm his virtue against vice]. The next plate presents a sample of battles during which l’invincible courage des soldats peut se manifester [soldiers have the opportunity to reveal their invincible courage]. Plates 4 to 8 however denounce the cruel abuses perpetrated by soldiers in wartime, as enemies of civil peace, at the expense of certain categories who are in theory protected by law: merchants and travellers, women and children, the clergy, the poor.” (P. Choné, p. 404, our translation). The Misères do not stop there: plate 9 depicts rogue soldiers captured by the regular army and marched back to camp. Plates 10 to 14 answer plates 4 to 8, which described the soldiers’ abuses, by representing the soldiers’ punishments for these excesses: tortures like strappado, hanging, harquebus shooting, burning at the stake, breaking on the wheel. It is to be noted though that the Misères do not focus only on rogue soldiers and their punishments: the next three plates depict the various fortunes of soldiers both good and bad. Some end their days in a hospice, on the side of the road, or even perish under the blows of peasants getting their revenge. Finally, “the conclusion glorifies the severity and the appreciation of a just and wise commander” (P. Choné p. 409 (our translation)) who punit les méchans et les bons recompance [punishes the evil and rewards the good]. That bad soldiers are punished and good soldiers are rewarded seems to be “the most obvious lesson of the Misères”.

Paulette Choné places this work by Callot in the context of the debate that started up again in 1618 as a result of the Thirty Years War: “The Misères closely adhere to contemporary concerns about how armies are recruited, disciplined and punished.” (p. 398, our translation). Callot’s series could thus be seen as a contribution to “the legal foundation of modern States.” (p. 400, our translation).