Slight discoloration in the margins of the sheet; faint diagonal fold in the lower right corner of the sheet; very slight x-shaped mark above the woman; the sheet along the upper platemark partially broken in the middle and reinforced on the back with paper tape. Small margins (368 x 325 mm).

Very scarce etching. According to de Crauzat, the 1st state, before some additional work as the tub in the lower left corner, was printed from only one plate and only 4 impressions are known; in the 2nd state, the 2 plates are completed. 6 impressions, numbered A to F and signed in pencil in the margin, were printed in colours, and 2 proofs were printed one in black the other one in grey.

This unnumbered impression comes in addition to the 6 impressions printed in colours mentioned by de Crauzat.

In 1898, when Steinlen made his first etchings, the Montmartre artist was already well-known for his lithographs. In March 1902, he etched Femme nue assise, s'essuyant les pieds and prints it in colours; the model appears in almost identical poses in three other works from the same year: two works in soft-ground etching and aquatint with the same title, made in May and June (Crauzat 79 and 91), and a pastel, Le Bain [The Bath], in which the naked young woman, seated on a low chair, is sketched in reverse.  In the pastel sketch, Steinlen represents the bedroom and its furniture in a more realistic way: a wrought iron bedstead with a woollen blanket, the striped wallpaper with a floral motif, a carpet with a geometric pattern, an earthenware basin and its jug, with a decoration of flowers. The young woman is represented in the same pose as in the etching: bent over, her face leaning towards the floor. However, if the representation of her body is almost identical in the two works, the technique and style used by Steinlen in the etching give it a very different  dynamic. In the pastel, her attitude is static: the young woman is washing her feet; her immobility matches the minute care taken to represent her surroundings. In the etching, her body is tense and angular, as if broken in two, contorted by the young woman's effort in drying her feet; that sense of an effortful movement is in keeping with the rustic (ou simple) interior design and the roughness of the floorboards. The topic of the etching is not the same as that of the pastel: beyond the theme of a woman washing herself, with a high-angle view, the etching is concerned with the body tensed in effort, which Steinlen emphasises by tightening the composition and lowering the perspective to the height of the subject.

Steinlen knew how to use different engraving techniques (aquatint, etching, soft-ground etching) and printing with several plates, in order to create a final effect that was close to both pastel and etching in colours: the woman's soft halo of hair, which evokes pastel, stands in contrast with the flat, smooth background, obtained with uniform inking; the shading of the body is done in aquatint, and the roughness of the floorboards is rendered in soft-ground etching.

We know that Steinlen made his first etchings following the advice given by the printer Eugène Delâtre, who specialised in etchings printed in colours. Femme nue assise, s’essuyant les pieds was very probably printed in his workshop. 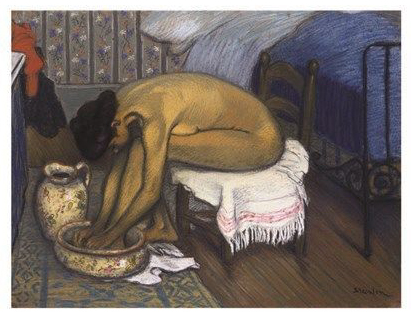