All prints: S. di RE - Archives 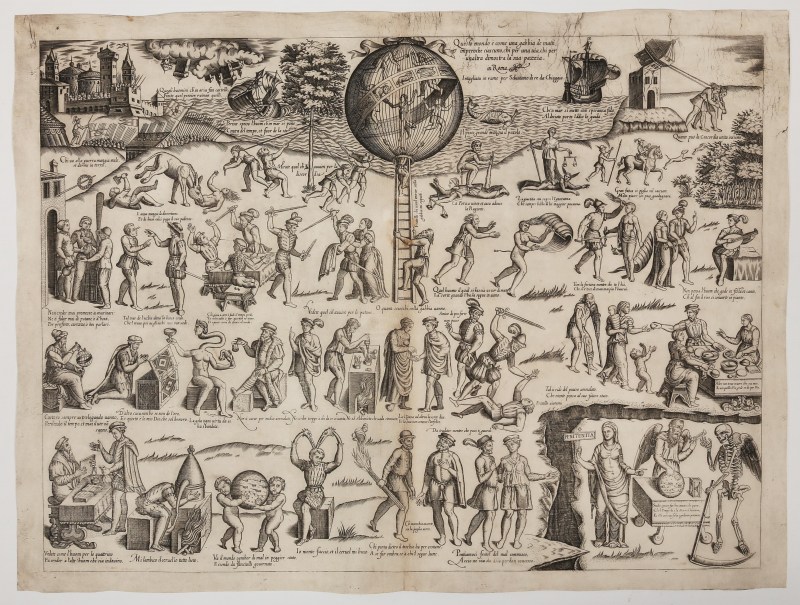 Engraving, 382 x 513 mm at the borderline. Rigoli and Savarese undescribed.

Very fine impression on laid paper with watermark (two crossed arrows, similar to Briquet 6282 appearing on a manuscript dating from 1567). Impression trimmed inside the platemark but with good margins around the borderline (sheet: 415 x 550 mm). Generally in very good condition. Ink stains in the upper part of the print are due to defects of the copperplate and are visible on all the impressions, e. g. the impression at the Metropolitan Museum of Art. Our impression was most likely printed before the addition of the printer Claudio Duchetti’s address (he was active c. 1565 - 1585). His address is printed in the bottom right corner of one impression at the University of Texas at Austin (Harry Ransom Humanities Research Center): the plate seems to be more worn and therefore the impression is likely later.

It is worth noting that the characters in this engraving are right-handed, and not left-handed as in some copies.

Sebastiano di Re was one of the first to embrace the theme of the madness of human life, widely favoured in Italian engraving from the 16th to the 19th century. Although they are rare, a few examples of similar engravings do exist, representing the madness of the World through the symbol of the cage of fools. Rigoli and Savarese, for instance, describe a picture that is very similar to Sebastiano di Re's, but engraved in another hand and published by Giovanni Giacomo de Rossi in Rome, around 1650-1670 (no. 851).

There is another example by Leonardo Milano (active in Milan around 1564), with the same group of characters to the exception of the personification of Penitentia, which is replaced by a man confessing and repenting to a cleric sitting at the foot of a Christ on the Cross (no. 849).

M. Bury notes that these secular prints were not just meant for a lay, popular audience: Prior Vincenzo Borghini (1515-1580) was known to keep some of these prints, next to others of a more devotional nature.